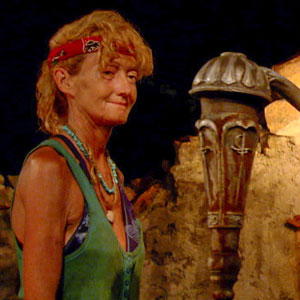 There’s no denying that the power of editing has a lot of influence when it comes to how a reality television program is shaped. People are turned into characters, one-dimensional versions of themselves. But based on this week’s interview with Jane, I’d say she got a pretty fair depiction. Even of the phone, there was loads of Southern sass – and quite a few lingering grudges too.
The famous saying “It’s not personal, it’s business” does not seem to mean much to Jane, based on her post-Survivor opinions. She said she’d never trusted Marty, she was sorry she’d trusted Chase, and that she never trusted Sash because he was a New Yorker and a real estate agent – two types of people she apparently finds very disingenuous outside of the game as well.
Jane said she’d trusted Chase because she thought he’d only previously betrayed Brenda. She left out that not only did Chase do that with her encouragement, but he did it to someone he’d been loyal to from the very beginning. “Yeah, I’m real sorry I trusted Chase so much,” Jane said. “I thought, here’s a Carolina Southern boy. Most of the country boys who’d been on the show before were real loyal and true to their word.”
Jane said she even gave Chase extra food and larger portions when no one was looking (before that’s honest…), and she was surprised when he betrayed her. “I think he screwed up big time but I probably shouldn’t have been so gullible as to believe him.”
Jane said she’d tried to convince Dan and Fabio to vote with her before Tribal Council. “After Chase, Holly, and Sash walked away, I looked at Dan and Fabio and said ‘I’m going to tell you something right now. You two are next to go if one of you doesn’t win immunity, and you are letting it happen. Why don’t we do a tie and see what happens? At least I got a shot to try and win something. I’ll flip over with you guys.’ But they just wouldn’t do it.”
Had she not been voted out, Jane doesn’t think she would have been able to win. (I’m calling bull**** on that one). “I said this on several occasions, even to Chase – ‘Do you realize how many La Flor people are on the jury?’ They are not going to give an old person money. They’re going to give it to someone who was on their tribe! My gut feeling still tells me that would have happened. If I had gone to the final with Chase and someone else, someone from La Flor would be walking away with the million.”
I’m not buying it. I think Jane knew she could win and I think somewhere underneath that hurt sense of entitlement she realizes that’s why she got voted out. What do you think? Is Jane selling herself short because she doesn’t want to justify their reasons for eliminating her, or would the jury really not vote for an old person?

Interview with Survivor's Jane: Going out with a bang
https://haligonia.ca/interview-with-survivors-jane-going-out-with-a-bang-30524/