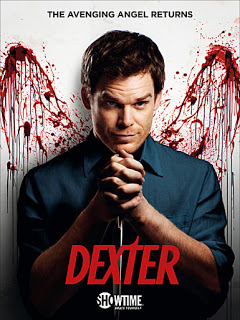 As if last week’s mother-son sex scene on Boardwalk Empire wasn’t enough, this week’s episode of Dexter caused me actual physical discomfort as Deb’s subconscious explored the possibility of romantic feelings for her adopted brother, all courtesy of her therapist.

Now I’ll get to the meat of the episode in a moment, but could someone please explain to me why this was necessary? Anyone, please, head to the comments and tell me why we need to think that maybe Deb is in love with her brother. We’ve watched the brother-sister relationship between these two for six years, and never has it crossed my mind that it could be…like that. Even when the actors portraying these characters were married and sleeping together in real life, the relationship has always been that of siblings. So why take this grotesque turn? Why warp the relationship of a sister who leans on her brother for support, siblings so close because their parents have been dead for years? What was wrong with that?

If we’re heading towards Deborah discovering Dexter’s dark secret, I don’t understand how “confused” or “complex” feelings towards Dexter could make that reveal any more poignant. I just don’t understand what the point of this was at all, and I’m mad.

OK, end of rant. There are other things to talk about here.

Dexter has always delivered very shocking, enthralling, exciting penultimate episodes. This one was subpar, as the season as a whole has been.

Too many things were wrapped up too quickly and easily. Batista has been captured by Travis, but Quinn comes to the rescue. No one dies. They get a slap on the wrist from Deb and Batista is mad at Quinn. What is this, a sorority? Quinn didn’t just let Batista walk home from the luau after too many strawberry margaritas, he has consistently screwed things up for his partner by being a drunken, destructive disaster. And so far, he hasn’t paid for it. Were there any serious repercussions that came from sleeping with Gellar’s former student? Were there any serious repercussions that came from failing to show up for work and letting Batsita go interrogate a suspect alone? No. Not only that, there’s been no redemption either. Quinn didn’t redeem himself by saving everyone from Wormwood, Dexter did that. Quinn just continues to be a schmuck. 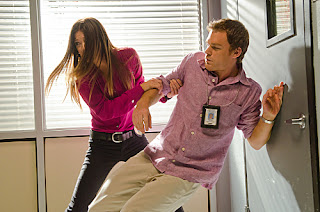 And yeah, Wormwood. What a dud that was. Beth shows up to Miami Metro with Batista’s ID card, and follows Travis’s advice to wait for Deborah to be present before releasing the gas. She follows Deb into her office, but Dexter spots her, realizes what is happening, and shoves her into an interrogation room before much of the gas has leaked out. So little came of this. Why did Dexter feel the need to evade Deb’s question of why he recognized Beth? A feeling? Why couldn’t he just admit that he was Googling the dead guy on the boat and saw a photo that proved backpack girl was his wife? Wormwood was a story that was actually high stakes, that had built up a lot of tension, and the result was that Dexter had nose bleeds and dizziness. Whoopdidoo.

I’m not saying that characters, main or tertiary, need to die for Dexter to be exciting. But it was all just too easy. Look at what happened after that – Dexter goes after Travis even though he should be at the hospital, weakened from the poison gas. He’s overtaken in a physical struggle, his own syringe of meds is used on him, and he awakes tied up in a boat with Travis pouring gasoline into the water.

We all know nothing bad will happen to Dexter, because he’s the eponymous character. He’s not going to die. But did he have to Houdini his way out of that situation so quickly? Travis looks like he would have been a Boy Scout, he can’t have tied knots that loosely. The boat blew up, but Dexter was already safely underwater, swimming to shore. 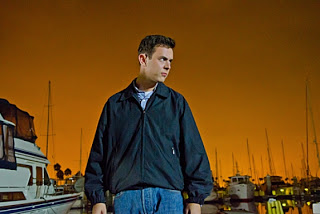 Not only did Dexter go after Travis when he was too weak to overtake him, but he’s tied himself too closely with the character. He made this mistake with Trinity, and it cost him his wife. It also put him in a position of suspect, and if that happens again it won’t so easily be explained away.

Dexter sent Travis a video message. To his phone. A VIDEO OF DEXTER IS ON A PSYCHO SERIAL KILLER’S PHONE. Sorry, but I had to yell there. What if the cops catch Travis? They’ll look at his phone! Oh yeah, and there’s also the fact that Travis painted a portrait of Dexter in his evil lair! Surely at some point the homicide team will be called to play detective on that crime scene, right?

OK, to go back to the Deb and Dex fantasy scene for a moment – part of what makes me so mad is that it has, for me, ruined what’s been the strongest storyline this season. Deb’s growth, mostly thanks to therapy, has been fascinating to watch. She’s been coping with the promotion and the politics that come with it. She confronted Matthews about the dead call girl and he fessed up, but then LaGuerta threw them both under the bus. As my boyfriend pointed out as we were watching the episode, the Matthews case could also be seen as a test for Deb’s willingness to look the other way. She used to be so black and white, but she’s not anymore. She didn’t kill Lumen last season. She didn’t immediately rat Matthews out. Would she send her own brother to the electric chair if she found out what he’s been doing? It’s a fascinating question, but was tainted by the ridiculous idea that maybe Deb is in love with her brother.

And, for the record, while Deb doesn’t have great taste in men, I don’t think she has ALWAYS chosen unavailable men. Lundy was old, sure, but they loved each other. He was killed, he was taken from her. Had that not happened, perhaps they would have liked happily ever after. You don’t know, Miss Disturbed Therapist!

Light at the End of the Tunnel

I don’t want to dislike this season, and all along I’ve had mixed feelings about it. Some reviewers have absolutely ripped it to shreds, have called into question the series as a whole, and I don’t think that’s quite fair. I still love Dexter, and this season has had its moments.

The scenes with Travis, Beth and Batista? That was some of Colin Hanks’s best work. It was captivating to watch him convince Beth to march to her death, suicide bomber style, with such passion and conviction. I thought the fact that Travis allowed Batista to pray before killing him was an interesting touch, although I hated that it was what gave Quinn enough time to come to the rescue so easily.

I like the idea that Deb holds such strong feelings for her brother that it’s what prevents her from sensing that something is off there, I just dislike that they had to take that down such a twisted road. It’s not that the topic is taboo that bothers me, it’s the fact that it doesn’t feel genuine to the character we’ve come to know.

I’m still intrigued by Louis, who apologized to Dexter but then dressed up the Ice Truck Killer evidence to send him in the mail. Where’s that going? Is he being set up as next season’s Big Bad?

Overall, I found the episode disappointing but I’ll remain optimistic for the finale. What did you guys think?

Dexter: I Fell in to a Burning Ring of Fire
https://haligonia.ca/dexter-i-fell-in-to-a-burning-ring-of-fire-50618/