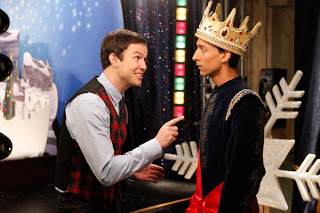 Twenty seconds into last night’s episode of Community, I realized that I was already enjoying it one billion times more than I’m enjoyed anything Glee has done this season. (Save for maybe the “Rumor Has It”/”Someone Like You” mash-up, which I admittedly played on repeat for a week.) This was the last episode of Community for god knows how long, it was a Christmas episode, and it was glorious.

The episode was chock full of clever jokes, hilarious, silly musical numbers and, yes, Glee bashing. I’m not going to lie — at one point, I did think to myself “Is this a little mean spirited? One show ganging up on another?” But Community is such a tiny show, and Glee has been such a hot mess lately, and I like to think that it’s all in good fun anyway, so I pushed the discomfort out of my mind and just soaked up the utter hilarity that was occurring on my TV screen.

The premise: Thanks to Jeff, Greendale’s glee club members were all hospitalized due to nervous breakdowns and the director wanted the study group gang to step in (again! because they did it once before!) to save the Christmas pageant and get them to Regionals. Everyone was against it, but slowly and surely they fell, starting with Abed.

The way it all happened was perfect. The glee club director easily sucked Abed in because Abed likes to like things, he likes to have fun with his friends, and he wanted everyone to have a happy Christmas together – even if only one of them actually celebrates Christmas, as we’ve learned in the past. Abed quickly pulled in Troy by appealing to his love of secret missions – sure, he’s a Jehovah’s Witness and can’t celebrate Christmas, but what if he’s just gathering information to take down holidays from the inside? Then it’s OK! There was an amazing, amazing rap number which I posted on the site a couple days ago. 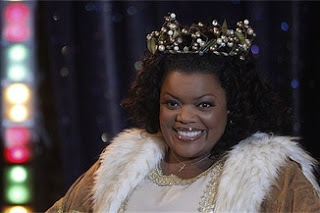 They appealed to Pierce’s Baby Boomer sensibilities, and Annie was pulled in by her love of song and a sexy outfit, which she then used to seduce Jeff. My favorite was Shirley, who was convinced by Pierce when he brought in a choir of orphans who sang about how they didn’t know what Christmas was about because the public school system won’t tell them. Beautiful. Oh, and they eventually got Britta, too. Dressed as a tree, swaying in the back.

The running joke about excitement over Regionals (even though Pierce still doesn’t know what it is) was perfect, along with jokes about how “the stakes aren’t actually that high, but somehow that makes it EVEN SCARIER” and the fact that, along with Regionals, there are many, many other competitions to freak out about. And Pierce making sure that everyone could also see the piano player (was that the same dude from Glee? Looked like him…) off to the side in the study room? Brilliant. 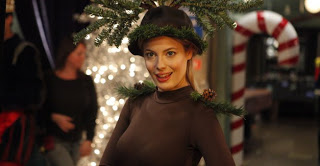 Once Abed realized that “Mr. Rad” the glee club director expected them to do a whole lot more than save Christmas, he ruined the pageant by allowing Britta to take center stage and sing the song that’s in her heart. She Britta-ed the pageant, Mr. Rad called her “the worst” and Troy insisted that they were NOT allowed to call Britta the worst. Everyone ended up coming together at Abed’s instead of splitting up for the holidays, so even though the exposed the darkness in Christmas by being too cheerful, or whatever, the episode had a happy ending.

So obviously, I loved the episode. I made a point not to delete it off my DVR because I know I’ll watch it at least once or twice more over the holidays. The same went for last night’s episodes of Parks and Recreation and The Office, which also delivered fantastic Christmas episodes. So here’s my wish for Santa: Can you cut NBC a break? Because other than Whitney, they play a lot of my favorite TV shows. Help a sister out, y’know?

What did you guys think of “Regional Holiday Music”? And check out a few more moments, quotes and bits from the episode that I loved: