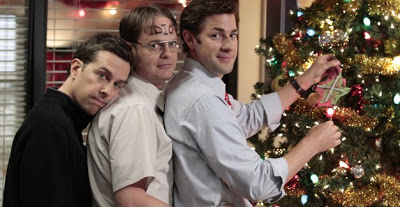 After an up and down season, The Office managed to end on a very hilarious note. Who do we have to thank? Certainly Mindy Kaling, who wrote the fantastic episode. Ed Helms too, who directed. Ellie Kemper, who stole the show by being hilarious as drunk, sad Erin. And also at their best were John Krasinski, Rainn Wilson and Craig Robinson.

It was Andy’s first Christmas as the branch manager, and he donned the classic red suit and sent an email to everyone asking for their Christmas wishes. Meredith wished for Andy to be her designated driver for the Christmas party, Dwight wished to be exempt from meetings that degrade his sense of adulthood (so, all of them?) and Stanley wished for a regular, theme-less Christmas. Andy’s wish was that everyone would like his girlfriend Jessica, but since Erin’s wish was that Jessica was dead that was unlikely to happen.

After some serious peer pressuring from Robert, poor sweet Erin downed a whole lot of booze and made her feelings about Andy and his new girlfriend painfully clear. She danced, she joked, she embarrassed herself. She called on Kelly to be mean to Jessica. 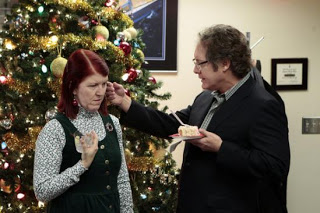 Robert himself was in a bad place – he wore a track suit with a blazer over it and revealed that his (third) wife had left him. I didn’t see that one coming, but it certainly opens the gates even more for Maura Tierney to return as a possible love interest for Andy.

Erin was hilarious, but the subplots were just as good. After finding out that Pam’s replacement was annoyed by Dwight and Jim’s constant pranks, Andy tried to discipline them by saying the next guy to pull a prank would lose his bonus to the other guy. Oh, what a mistake. It just caused reverse-pranking, with both Jim and Dwight trying to steal the other’s bonus by staging a fake prank. Dwight put a porcupine in his own desk. Jim defaced a picture of his own daughter. It was amazing. The best part? Andy realized his mistake and confessed to Jim that he wouldn’t mess with their bonuses. Seeing the opportunity, Jim told Andy that he’d relay the news to Dwight…and then he “forgot”. So Dwight kept staging pranks on himself, all night long.

Darryl’s plot was smaller, but adorable. He invited Val from the warehouse to the Christmas party and when she asked about the dress code he told her “people get dressed up”. So poor Val showed up in a gorgeous floor-length dress while everyone else was in cute holiday tops or sweaters. Oops. She felt super uncomfortable because people were laughing at her, but then Darryl changed into a tux to make her feel better. It was really sweet, and a nice juxtaposition to the pranking and drunk Erin storylines.

The episode ended on a slightly confusing, but interesting note. As promised, he drove a plastered Meredith home, but before dropping her off he tailed Robert California, who had a plastered Erin in his car. Nothing ended up happening – Robert hugged Erin goodnight and advised her to take Aspirin and drink water – but the fact that Andy felt concerned, protective and possibly a little jealous reveals that he probably still has feelings for Erin.

Sidenote: Was Robert drinking that night? Because some reviews I read suggested that he was, but he drove Erin home…anyway, I enjoyed this episode more than any other from The Office this season. What did y’all think? And, check out these highlights from the episode:

The Office: Tis The Season To Be Funny
https://haligonia.ca/the-office-tis-the-season-to-be-funny-50487/