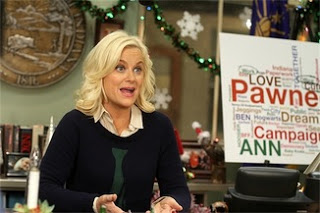 Leslie Knope is a special lady. We know it. Ron Effing Swanson knows it. And the rest of the parks department knows it too. The Parks and Recreation Christmas episode was equal parts funny and heartwarming, and it made for a great followup to the spoofy, sarcastic (but also hilarious) episode of Community.

The episode opened with Leslie on a secret mission – to sneak into her office and grab some work because she was on a two week suspension. Chris caught her and the interaction between the two of them was priceless – I think the ethics trial of Leslie Knope was the best thing to happen to his character, because he keeps having to balance punishing Leslie as an employee and ultimately really liking her as a person.

Without her job to focus on, Leslie was ready to devote all her time to her campaign. But that was dead, according to her campaign managers – she was polling at an atrocious 1%. Bottom of the milkshake levels. Suddenly with a lot of free time on her hands, Leslie decided to get engaged as a citizen and formed the Parks Committee of Pawnee – PCP, because “like the drug PCP we are so fast acting and powerful, we should be legal.”

Leslie stormed into Chris’s office with a list of demands, but also to drop off his Christmas present – a cool Bluetooth stopwatch to record his running times. Again, perfect juxtaposition of their simultaneous status as friends and foes.

Meanwhile, Ben was out looking for a new job in accounting after “resigning in disgrace”. He took interviews to do in-house accounting at an accounting firm and to work for Dennis Feinstein and his cologne/perfume business. Both went horrendously and Leslie, sensing that Ben didn’t want to take the practical gig at the accounting firm with bad carpeting and a crappy commute, encouraged him to take a month and see what else was out there – and that’s just what Ben is doing, taking some time to decide what he wants to do next. Perhaps it will involve model trains.

Who else loved the appearances from Jean-Ralphio this week? So, so great. I don’t know what was better, his hair or the end tag where we saw him taking the accounting gig Ben had interviewed for and then, upon the revelation that he has no accounting experience, getting fired.

The real heart of the episode cam with the other plot point – Leslie’s awesomesauce gift giving skills. Every year she gets everyone the perfect, thoughtful gift and this year was no different. From Ron’s automatic door closer to April’s painting of her destroying the Black Eyed Peas, to Tom’s tiny throne and watch – because she couldn’t get him tickets to the “Watch The Throne” concert, and plus the watch said “Baller Time” -, to Jerry’s socks. She knows them all so well, and she cares about them all so much. So Ron decided it was time to repay her by coming up with a fantastic gift. He suggested a scale model of the Parks Department, carved out of wood. Ann one-upped him and suggested them make it a GINGERBREAD model. Poor Ron. 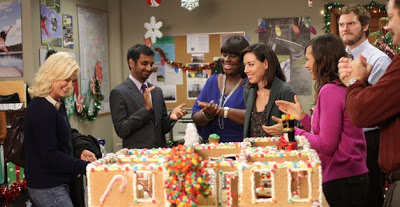 Everyone pitched in to make the gingerbread office, except poor Ron who couldn’t manage to get the walls to stick together. I agree, Ron, it’s super hard. After apologizing to Chris, he gave Leslie her Christmas gift – after only one week instead of two, her suspension had been lifted. Leslie joined her coworkers at the Christmas party where she was not only brought to tears by their amazing gift, but also their amazing offer – to take over her election campaign.