Are we really only halfway through this season of Dexter? Following last night’s episode, you’d think we’re much closer to the end than we actually are. 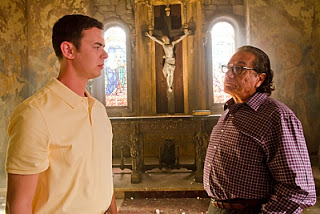 After learning that the Doomsday Killer’s latest victim was a waitress at a museum cafe and discovering a special kind of glue used to repair a hole in the angel wings, Dexter headed to the Museum of Art to track down the killer (or killers). It was surprisingly easy to spot the guy he’d seen at the scene of the crime, since Travis was part of a video the museum had put together on art restoration. One quick visit to the museum’s website later, Dexter had figured out who Travis is.

I have to say, I was surprised by the interaction between Dexter and Travis. After ambushing Travis in his car, Travis told Dexter that he hadn’t even been able to bring himself to kill the victims and that it was all Professor Gellar. Gellar was the one God speaks to, or through, and Gellar is the one carrying out God’s wishes. And then Dexter just let Travis go. Like, really? I know Dexter plans to use Travis to find Gellar, the man he believes to be the real culprit, but couldn’t Travis just as easily tell Gellar that a madman is after him? It seems very unlike Dexter to just set the guy free.

Of course, we don’t yet know if Gellar is or isn’t a living person. It’s been suggested that he’s a figment of Travis’s imagination the way Harry is imagined by Dexter, and that looks more and more likely. We still haven’t seen Gellar interact with anyone other than Travis, and Travis hallucinated the picture of Gellar on the newspaper this week. On the other hand, Travis called him after being attacked by Dexter. Can you get hallucinations on the phone? But then again, Travis was still the one to do the dirty work and obtain the “whore of Babylon” in the end. Gellar was there, but it was Travis in the driver’s seat and Travis who put the girl in the trunk. It would make for a very fascinating plot twist – especially since Dexter is looking for a Doomsday Duo and doesn’t think Travis is the true villain. I wonder how long it will take him to figure that out. 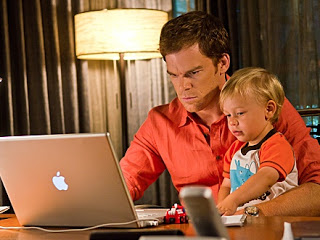 I have to say, I was really surprised and rather sad to see Brother Sam shot at the end of the episode. We don’t know for sure that he’s been killed, but it certainly did look that way. Three bullets to the chest isn’t exactly a cakewalk. I like Mos Def as an actor and was really intrigued by Sam’s burgeoning friendship with Dexter. He seemed great with Harrison, and we saw Dexter open up to him a little about his past. Dexter has been close to many people before – Lila, Miguel, Lumen – but I was curious to see what a relationship with Brother Sam would do for him.

I’m sure we’ll see Dexter look to avenge Brother Sam’s death, but I’d like to see something more come out of this storyline as well. I’m just not sure what.

As per usual, the Miami Metro office drama is probably my least favorite of the episode. Some of it works for me, some of it doesn’t. Masuka has a new intern, a tech-savvy guy who helped erase all traces of the sale of the Ice Truck Killer stolen evidence from the Internet. So maybe the Masuka/hot intern storyline isn’t going somewhere, but this might?

Meanwhile, Mike Anderson is…well, also around. The newbie from Chicago was impressed when Dexter managed to unravel a murder-suicide storyline in under sixty seconds, but then immediately ruffled feathers by insulting everyone else in the department. Did he really not know that Deb and Dex are siblings?

Deb and Harrison’s nanny, Jamie, got into a big fight which finally inspired Deb to move into her own apartment – the bloodstained murder-suicide location! Hey, it’s on the water. My favorite line of the night was when Dexter walked in to see his sister and his babysitter yelling at each other and thought to himself “Would it be weird if I just left?” I would’ve thought the same thing. I hope that doesn’t mean I have serial killer tendencies.

Quinn is back to being a world-class douche by sleeping with a professor who’s not only connected to the Doomsday Killer case, but actually used to have a live-in relationship with Gellar. Um, great call Quinn. What a winner. When picking Quinn up from her apartment the next morning, Batista discovered a notebook of Gellar’s that was related to the killings. The professor with the unique tramp stamp must become important later in the season.