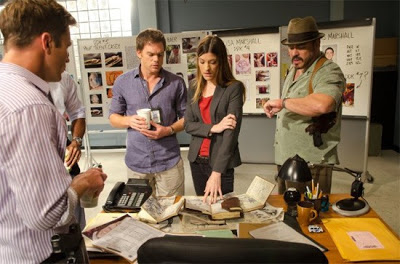 Warning: Spoiler alert ahead if you have yet to watch Dexter‘s season finale

What the hell? No, seriously — What? The? Hell??? I’m so furious at Dexter right now that I can barely type. I’m fuming. I’m not sure I’ve ever hated a season finale as much as I hate last night’s episode of Dexter. Argh!

OK. As you know, last night The Big Moment happened – Deb walked into the church just as Dexter plunged a knife into Travis. It’s a moment that the show has been building towards since season one, the question that has been on every viewer’s mind for six seasons. What will happen if Deborah discovers her big brother (BROTHER) is a serial killer?

It was the single most important moment in the whole series, and they ruined it. RUINED IT. Because when Deb discovered Dexter, she was walking into that church to declare her love for him. For Dexter. Her brother. Adopted or not, that’s sickening. And worse, it’s out of character. After six years of getting to know these characters and this relationship, the show has devoted exactly two episodes to deciding that suddenly Deborah is in love with her brother. It took a fascinating relationship between two very different siblings and turned it into a discomforting, unrealistic gag that’s meant only to shock and not to stay true t the characters. I don’t even know how I’m supposed to continue to watch the show now — Deb was one of my favorite characters, and now I can’t stand the sight of her. Every awkward moment between her and Dexter just reminds me of how ridiculously stupid I think this storyline is.

My show is ruined. And it could’ve been a decent episode. 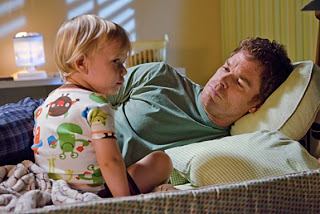 I’m so hung up on the final five or so minutes that I can’t even focus on what happened leading up to that. Maybe it’s for the best, since it was just OK. It was rather obvious that Harrison would be placed in danger, and Dexter risked his own life to save his son. The stuff between Dexter and Harrison, though a tad predictable (would the writers have been so cruel as to kill both the mother of Dexter’s child and Dexter’s child?), was great. The tender moments between the two were some of my favorite scenes in the episode.

It seemed like a lot of things were needlessly left as loose ends. What about Louis? That basically went nowhere, so I can only assume it was set up for next season. The tension between Batista and Quinn resulted in Batista deciding to transfer Quinn and Quinn finding a loophole by classifying himself an alcoholic. Sure, that will make things difficult for the two next season, but this season? We watched Quinn spiral into a destructive douche only to have it go nowhere.

Anyway, everything built up to Dexter chasing Travis down on a rooftop, where he planned on offering up Harrison as a sacrifice during an eclipse that was meant to signify the end of the world. But since Travis’s last step, which involved killing Dexter, had obviously failed the plan went off the rails. Dexter managed to overtake Travis, which happened a little too easily, if you ask me – apparently there was a shot of Dexter emptying the syringe before sticking himself with it, but it was cut, as was a voiceover explaining what happened. That left viewers wondering why Dexter wasn’t put to sleep, and seems like plain sloppy writing to me. So Dexter was able to save Harrison and take Travis back to the abandoned church to be killed. Meanwhile, Deb was bursting into her therapist’s office exclaiming “I finally told my brother that I love him and he said he loves me back!… I’m in love with him!” It was equally impossible to believe and angering to watch. When Deb followed it up with “Is this just horribly wrong?” I felt compelled to shout at my TV “Yes! Yes!” and I wasn’t just talking about Deb’s feelings for her brother. The show as a whole, has gone horribly wrong.

So armed with a confession that she’s “in love” with her brother, Deb arrived at the church to find Dexter plunging his knife into Travis. It was all set up too meticulously to be anything other than premeditated. Deb has to know Dexter is a serial killer now – anything less would be a cop out. And it would have been such a fantastic, show changing moment if it hadn’t been ruined by this stupid, stupid romantic storyline. I will never, ever be on board with the idea that Deb is actually in love with Dexter. I will never believe that she momentarily thought she was in love with Dexter. In that instant, in that confession she made to her therapist, both the character of Deb and the show of Dexter morphed into something I don’t recognize or like.

The big reveal should have been so much stronger. Dexter has been a constant source of comfort and stability for Deborah, a woman who’s been through more tragedy and despair than almost anyone. She loves him intensely and he never shows her that same affection. The moment where Dexter told Deb “I love you too” after she heard his boat had been found washed up on shore, that should have been a great moment. It should have been a moment where Deb realized her big brother loved her just as much as she loves him. Instead, it had weird and uncomfortable undertones. There was absolutely no need for Deb to be in love with her brother before discovering he’s a serial killer. He’s her only family, the revelation alone would have been enough.

I’m just ranting now, so I’ll open it up to you guys – what did you think of the finale? Are you as mad as I am? Do you think I’m overreacting? Sound off in the comments!