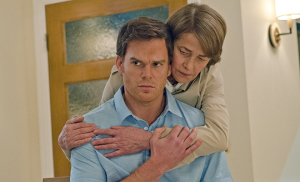 Last night’s episode of Dexter, “Every Silver Lining…” was another good installment in the final season so far. There’s been a lot of debate already about both Deb and Dr.

Vogel, and I like how this season is focused on Dexter’s relationships with these two important women.

There was still some of the same old Miami Metro stuff that I’ve never cared for. Quinn is dating Jamie, Batista knows. Batista wants Quinn to take the sergeant exam, Quinn is a loser, etc. Do we really think Quinn will survive this series alive? Every season, the Internet predicts that he’ll be killed.

There’s a lot of debate about Deb’s behavior, and whether it feels forced. Some people think the storyline itself is difficult to believe, others think it’s the acting. Personally, I don’t mind the storyline. Deb should be a messed – she’s been through a lot before, but nothing this bad. Finding out her brother was a serial killer, yes, that was bad. But she killed LaGuerta in cold blood. She did make the wrong decision, the immoral decision, and that doesn’t seem like something Deb could easily live with.

When Deb was shacking up with a criminal and doing drugs, I didn’t love it.  But I’m much more interested in her murdering a hit man and then, when Dexter figures it out, asking him to cover it up for her. She has totally lost her moral compass, and I’m interested to see whether she can ever get it back.

I’m even more intrigued by the Dr. Vogel storyline. This week we learned that she created Harry’s Code when Harry sought her advice on his budding serial killer of a son. Harry, in fact, had never been as comfortable as he seemed with Dexter’s “dark passenger”, it was Vogel who convinced him that this was the right way.

I read a few reviews today, and it sounds like viewers are pretty split over whether they find this believable. Personally, I buy it. Harry was a cop – it was always a stretch that he would have been able to come up with that code, no matter how much he loved his son. And after all, Harry did kill himself after witnessing one of Dexter’s kills.

I’m interested in how the writers are using Vogel to explore some of the more complicated aspects of Dexter’s personality. He cares more about Deb than a typical psychopath would. He loves his son, cared about Rita and Julia Stiles. (What was her ridiculous name?) He is capable of compassion. Brother Sam could see it. And now Vogel is noticing it – Dexter thought it would have been nice to have someone to talk to wen Harry died, and that’s abnormal for a psychopath.

The way Vogel spoke, it was as though she’d created Dexter like Frankenstein created a monster. He was angry at her for that. Could he have ever become something else, someone other than a serial killer? Working within the framework of Harry’s Code is better than killing innocent people. But as we explore the capability for emotion that sets him apart from other psychopaths, I hope the show also looks at the question of whether Dexter could have become something else.

Vogel didn’t just come up with the code for Dexter. As the episode progressed, we learned that she cares about Dexter like a mother. We also learned that her views on psychopaths are nontraditional, which is why Harry had sought her advice in the first place. She sees psychopaths as, sometimes, assets to society. Her relationship with Dexter is clearly moving into a creepy direction – is she a psychopath herself? Maybe.

I like how “the brain surgeon”, a serial killer who scoops out a part of the brain, has been linked to Vogel as well. The brain pieces are being left on her doorstep, so she has called in a favor with Dexter. She wants him to get to the brain surgeon before the brain surgeon gets to her. But there’s got to be more here than meets the eye. Is the serial killer forcing victims to commit murder one of Vogel’s former patients? Is it maybe someone closer to her? Or could it be Vogel herself?

Of course, that’s just all guesswork. Anything could happen this early in the season. What do you guys think so far?