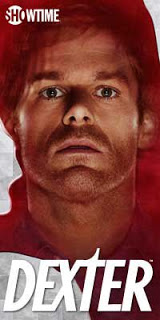 Wow. What an episode.
Two things make this an interesting season of Dexter for me. The first is Lumen. Dexter behaves in a way around her that is totally different from how he’s ever been with anyone else. How long can that last? The second is the lack of a sole villain. Yes, Jordan Chase is the “big bad” of sorts. The target of Lumen and Dexter’s hunt and an integral part of the barrel girls killings. But he wasn’t the only one involved, and even more interestingly he never actually did the killing. Until this week.
This week, we saw Jordan Chase crack. No, shatter. He’s been more enigmatic than many of Dexter’s other targets. The idea that he doesn’t kill but encourages others to do so is bizarre. He’s been ice cold and robotic the entire season, so we’ve never really gotten to see him weak, vulnerable or even ruffled.
This week was different. And this week was very, very tense.
Closing In 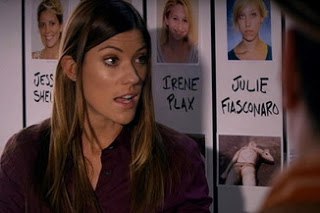 First of all, Deb is seriously closing in on Jordan Chase. And like in so many previous seasons, if she catches the bad guy she’ll also find a startling connection to Dexter. But Deb is different this season. She’s so in tune with what Lumen is thinking – what the escaped barrel girl and her mysterious helper are thinking – that there is an eerie suspense to the whole thing. We’re not so sure Deb would be disgusted by Dexter anymore. Not if she only found out about the killings related to Lumen, anyway.
The thing is, with only one episode left there are so many possible outcomes to this season. Will Jordan Chase take the fall as the vigilante killer? I don’t know if Deb would fall for that. Will Lumen take the fall to protect Dexter and his family? Will Deb or Quinn discover Dexter?
Interference
One person we don’t have to worry about anymore is Liddy. Or do we? 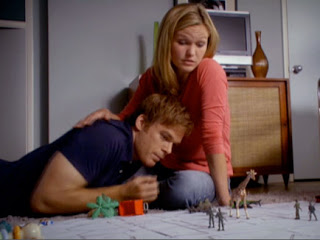 Early in the episode, Dexter and Lumen had a chilling moment when they realized they were being watched (during an oddly intimate moment of planning Jordan’s murder), thanks to interference with the baby monitor. Dexter quickly figured out that the surveillance equipment had been taken out under Quinn’s name, which meant there was a good chance he’d have to off Deb’s lover…again. (Which, by the way, EWWW. Deb was with Dexter’s brother, the ice truck killer. Deb is Dexter’s half-sister. Was Harry the ice truck killer’s baby daddy too, or did they just have the same mom? Either way, ew!)
Anyway. Dexter finally thought he saw Quinn coming to check the surveillance van, and went to do his thing…but it was Liddy, and he took a taser to Dexter before Dexter even knew what was going on. And just to make things even more complicated, while Dexter was tied up in the back of Liddy’s van, Lumen was off to visit Jordan’s little girlfriend.
Lumen received a call from Emily Birch, Jordan and the other sickos’ original victim, saying that she was going to go to the police. Even though we couldn’t see it yet, it was obvious that Jordan was in the room watching Emily repeat the words he’d instructed her to say. When Lumen couldn’t get in touch with Dexter (since he was in the back of Liddy’s van waiting for Quinn to come make the bust) she went on her own. But Jordan wanted Dexter.
Fight
Luckily Dexter seemed to have a lot more experience in combat than Liddy did. He managed to attack Liddy and drive a knife into his chest…just as Quinn arrived at the scene. My heart pounded as Quinn tried to peer into the locked van where Dexter sat with Liddy’s dead body. Then I gasped when some of Liddy’s blood trickled out of the van and onto Quinn’s shoe. Luckily the close call was just that – close, but Quinn eventually left. With Liddy’s blood on his boot, is there any chance he’ll somehow get brought into all this? 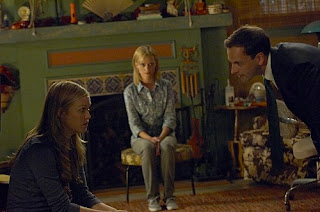 Meanwhile, Lumen was fighting for her life as well. As soon as she arrived at Emily’s house she could tell something wasn’t right, but it was too late. Jordan prevented her from leaving. Lumen tried to make a run for it while Emily badgered Jordan for approval, but it was too late. As he grabbed a poker to kill Lumen, complaining that he’d never had to do anything before, poor Emily came to her defense. (I say poor Emily because as much as she angered me, the poor woman has some serious mental health issues.) With two blows Jordan killed Emily.
Dexter arrived to find Emily’s dead body and a trail of blood that led outside. He saw the pocketknife he’d given Lumen bloody and on the ground and knew she was putting up a fight. But where?
I cannot wait for the final episode. There is so much left to happen! Will Lumen come out of this alive? Will someone find Liddy’s body? Who will get to Jordan Chase first?
What did you think of “Hop a Freighter”? Was LaGuerta redeemed a little bit when she helped Deb secure the court order to detain Jordan Chase, or is she still a total B? Do you want to see Quinn and Deb back together? I think he finally won me over in this episode. And how about that nanny planning Harrison’s birthday party? At the beginning of the season I had a bad feeling about her that never panned out, but now I’d be crushed if she turned out to be evil.