If not now, then when? Two of the remaining three teams on The Amazing Race are made up of women. I’m not the only fan who’s been longing for the first all-female win in the show’s history, so I’ve got to ask – is there anyone else out there who’s going to be totally crushed if Jill and Thomas win?
It’s not that I exactly have something against Jill and Thomas. He’s pretty pompous and arrogant, but they can be funny. It’s just that I really, really want one of these girl power teams to win. I’ll take either Team Doc or Team Home Shopping. The docs are kind of boring, but I admire their consistently strong placings and the fact that they never seem to bicker. Brook and Claire are funny as hell, but can also be incredibly annoying. They’re polar opposites, but I’m rooting for a win from either of them.
Winners never quit, quitters never win
Nick and Vicki were pretty much doomed from the start of the leg. Considering they left more than six hours after Nat and Kat’s first departure time of 4:37 p.m., I assumed they didn’t have a snowball’s chance in hell of catching the 12:25 a.m. flight to South Korea that the other three teams made. They didn’t, and the nine hour flight time difference was their kiss of death. That’s what happens when you lay down and die in exchange for a penalty, Nick! What a loser. Just in case viewers had forgotten what a loser he is, the TAR producers supplied us with a nice little Nick is a Jerk Most of the Time montage.
So basically this leg was a race to first place, because we knew the final three teams would be Nat & Kat, Brook & Claire and Jill & Thomas. Even though the elimination was obvious, it was still a pretty exciting episode. First teams had to head toward the North Korean border (eek!) and go white water rafting. That in itself was pretty intense, and I especially like Brook & Claire’s 40-year-old Virgin shout-out when one of them yelled “Kelly Clarkson!” That, combined with the fact that they have saved their most flair-iful outfits for the final legs, makes me forget how annoying they are. 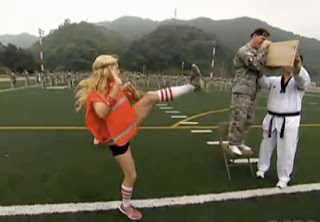 The Roadblock this leg called for one team member to search a Taekwondo (I did not know that was how that’s spelled. Also, spellcheck’s word suggestion for it was “Wonderbra”.) army for a matching headband. Now, I ask you, is a Taekwondo army really a practical thing for a country to invest in? Is there really much hand-to-hand combat anymore? What, are you going to kick a tank in half? Indiana Jones has shown us all the wonders of a gun! That said, those kicks to break the block of wood and get the clue were AWESOME and I need to sign up for ninja training ASAP.
Brook during this entire challenge was both hilarious and completely irritating. I’m at once exhausted and fascinated by that woman, but love her or hate her you had to laugh when she tried to kick a piece of wood in half after getting her clue. She’s just so enthusiastic!
Ice Queens
Perhaps Brook should have been paying more attention to the clue and less attention to her ninja moves though, because next she and Claire made a big mistake. Instead of walking or taking a subway to the Detour, they took a cab when the clue specifically said not to. That meant they beat Jill and Thomas to the speed skating rink, where teams would have to complete 24 laps together before receiving their next clue.
None of the three teams performed the other task, which required them to carry around some ginseng root or something. It sounded like it provided ample opportunity to get lost and I also would have chosen ice skating. Sure, maybe you haven’t skated since you were five – but you haven’t walked around South Korea ever so you probably still have an advantage with the skating.
Although Brook and Claire arrived first at the rink (thanks to their illegal cab), Jill and Thomas managed to gain a few laps on them and left shortly ahead of them. Watching everyone make fools of themselves on the ice was pretty funny, though – was Thomas the worst? I think he might have been.
While Nat and Kat (who fell a little behind during the leg) completed their laps on the ice, Brook & Claire raced against Jill & Thomas to get to the pit stop. Jill and Thomas were having trouble finding the location, apparently because Jill was asking the wrong people for directions. “You can’t ask old people!” Thomas yelled, and Jill replied “What about this guy? Is he in your age range?” Ha! She totally saves that team from being unlikable. I can only guess that Thomas thought maybe younger locals would have stronger English and therefore give better directions. But it sounded funny.
Kiss the Travelocity Gnome Goodbye
Was anyone else a little surprised at how flirtatious the South Korean men were? One guy offered to lead Nick and Vicki to their destination but instead took them to a gas station where he bought Vicki a sandwich. (at which point Nick observed that the man wanted Vicki and said “I know you were good for something.” Should I rant about what a disgusting pig he is for saying that, or what an obnoxious jerk he is because she is good for everything because she did everything the entire race. Gah!) Plus Brook and Claire’s cab driver practically proposed to one (or both?) of them at one point, marking the one and only time the ladies did not willingly increase their kiss count.
Brook and Claire made it to the pit stop first, but incurred a 30 minute penalty for taking a cab. That gave Jill and Thomas enough time to make it to the mat and score another awesome vacation. Brook and Claire’s time out ran up in time for them to make second place and Nat and Kat predictably landed in third. 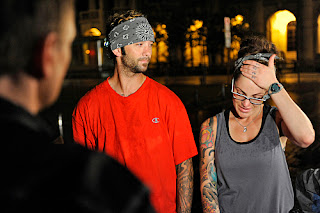 As I said before, considering we barely saw Nick and Vicki the whole time and knew for a fact they’d be eliminated, it was still a pretty decent leg. Nick ended his run on The Amazing Race with the same apologetic crap he began every leg with, and I can only hope Vicki kicked him to the curb the moment the cameras were off them. As she said “It was the best experience of my life” I had to ask “Was it?” and as he said “I had a great time” I had to ask “Did you?” Vicki pointed out that their time on the race was a success because she didn’t kill him, which forces me to point out that she REALLY needs to reexamine her standards.
OK, Amazing Race fans, are you excited for next week’s finale? Who do you think will win? (I’m predicting Jill and Thomas, because life is unfair.) Who do you want to win? (I’m still torn between Team Doc and Team Home Shopping.) And what did you think about this episode?