OK, why had we never met Eli the nurse before? After the unfortunate departure of the cute anesthesiologist who was wooing Bailey (he got a new show), I for one was very happy to meet Eli on Grey’s Anatomy this week. Can you say cute? And he asked Bailey out! Whee!
Eli was integral in Bailey’s quest to cure pancreatic fistulas, something that has become much more interesting than it sounds. I like how she bribed Lexie, Avery and April to deliver good research on the topic with a cool surgery. Nothing says Grey’s like geeky doctor competitions. Lexie wanted the surgery as much as she’d wanted a pony when she was a kid. April wanted it as much as a pony too. Only she’d worked hard as a kid and actually gotten a pony. named Sparkle. Careful April, no one likes a kid with a pony! 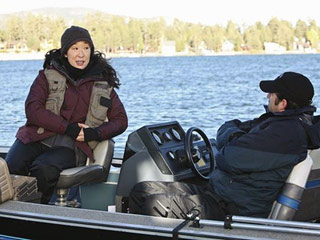 Cristina went fishing with Derek this week, which was weird for everyone. Especially Meredith. Even though it’s still a little strange that Cristina and Derek are BFF now, I’m liking their relationship. Nothing made me laugh more this week than Cristina begging Derek to quiz her on the different kinds of bait. (Or flies? I don’t know. My outdoor activities are limited to reading and walking around with coffee.)
The fact that Cristina and Derek were off freezing their butts in a boat and bonding meant that Meredith and Owen had the chance to spend some time together too, though theirs was much less harmonious. Things have been icy between these two ever since Cristina went off the deep end, and for obvious reasons. They both care about her a lot and have very different ideas about what she needs. This week they clashed in the OR too – Meredith pressured Owen to make a decision when he stalled a little, and then he freaked when she put one more stitch in a patient against his orders. (Military people…such control freaks!) I understood the conflict, but what it came down to – that Owen thinks Meredith is reckless – felt wrong. Meredith is currently one of the most stable people on the show, and Owen wasn’t around when she was all dark and twisty. He doesn’t want her around Cristina because she once offered up her life in exchange for her husband’s? Why?
Meanwhile Callie and Mark brought an end to their little fling because sex made Callie sad (it reminded her of how much she misses Arizona) and Mark was thinking about Lexie instead. Nice. Only one of them got a happy ending, at least for now. Mark scored a date with Lexie by pretending to help her out with Eli the nurse (since when do male nurses love Mark?) and then they kissed at the bar. I was happy – I want these two together. But will it last? And, surprise! Arizona came home. This I did not love. I didn’t want her to come home because she was sad. That meant she was giving up her dream. I wanted her to get shot (in a non-lethal way!) or catch malaria or something. I wanted her to be forced home, and then she wouldn’t have a reason to resent Callie. Instead she came home all teary-eyed and scratchy-voiced, which is not cool. Plus Callie slammed the door in her face. But that I know won’t last long. 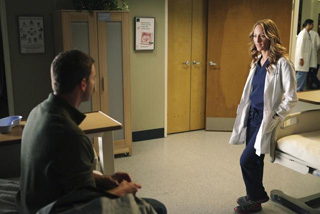 Oh, and guess what? Teddy’s getting married! They sure love an impromptu wedding on Grey’s, don’t they? Teddy offered to marry Scott Foley because he was dying and his girlfriend (or whatever) didn’t want to tie the knot so he could access her benefits. But Teddy had no problem with the idea – she was the one who suggested it! Funny, I don’t think she would have made that offer had the guy looked like, say, Danny Devito rather than Scott Foley.
All in all, it was a pleasant episode. I liked seeing Alex and Lexie work together (“You’re getting that award tonight, you can’t miss that” was fantastic) even though I knew he’d go back to peds. Alex is meant for peds. The honeymooners who fell down a ravine were pretty heartbreaking too, and Meredith’s final assurance that “he’s still in there” was poignant without being over-the-top (as Grey’s can sometimes be with the medical metaphors.)