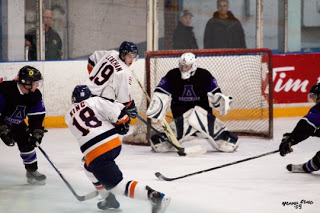 Halifax Drops Amherst for Third Time in November
For the second time in 7 days the Halifax Lions easily dispatched of the Amherst Ramblers. The Lions have now beaten the Ramblers three times in November, outscoring them 14-3 in the process.
The Lions improve to a record of 7-10-2 while Amherst drops to 10-12-1.
Kyle Dilosa led the way for Halifax with 2 goals and 1 assist. The newly acquired Brendan Taylor has made an early impact on the offensive end for the Lions. The Oshawa, Ontario native and former Gatineau Olympique has 3 assists in 2 games and has found a connection with Dilosa. The two big forwards clicked on a line with Justin Belanger that accounted for 3 Lions’ goals.
Taylor has taken over control of the power play and created a lot of scoring opportunities for the Lions with the man advantage. The “pass first” centre seems to have lighted a spark under Dilosa who had his best game of the season.
It didn’t hurt that there were scouts from the Cape Breton Screaming Eagles and Saint John Seadogs in the crowd at the Forum. Dilosa played briefly with the Seadogs last season and is hopeful for a return to the QMJHL.
Wayne Bedecki scored on the powerplay for the Lions who are now 7-7-1 in their past 15 games. Stuart Lenehan added a shorthanded goal and Andrew Wigginton scored his seventh goal of the young season.
The game featured a flurry of goals in the second period as the teams went back and forth. The Ramblers narrowed Halifax’s lead to 3-2 with 2 minutes left in the second. That’s when Belanger and Taylor assisted on Dillosa’s second goal of the night to secure the victory for the Lions just before the end of the period.
The Lions next game is Sunday at the Forum vs. the Campbellton Tigers. The Tigers have the league’s worst record at 3-16-2. Game time is 3:30.