The season four premiere of Downton Abbey aired earlier this week in the UK, which some of you may have watched. If you’ve seen it, click through to talk about it! If you’re waiting for it to air on PBS in North America, I will see you in January.

Last season, I was furious with actor Dan Stevens, who played Matthew Crawley. His refusal to return to the show, even part-time, meant he had to be written out of the series. So season three ended with Matthew dying in a tragic car accident. After already losing Lady Sybil earlier that year, I wasn’t sure the show could recover from an overload of melodrama. I’m happy to say, I quite liked the season four premiere.

The season picks up six months after Matthew’s death, and Mary is still buried deep in her grief. I worried that this was a Mary we’d see for most of the season – a sad, broken widow constantly dressed in black. But by the end of the episode, Mary had found the strength to take a more active role in managing the estate, which her son now owns a healthy percentage of. 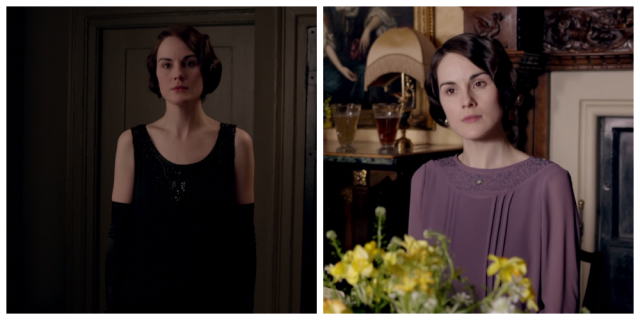 Mary, looking stoic in black and purple. The details on the black dress were more beautiful than what comes across in the screen grab.

Tom and Carson were the two who really pushed Mary to do it, and I liked how the show used Mary’s special relationship with Carson here. I’ve never been particularly sympathetic to Mary, but the scene where she cried in Carson’s arms did get to me. I like the idea of a stronger, more independent Mary having a say in how Downton is run and defending Matthew’s vision for the estate.

Meanwhile, O’Brien up and quit. The groundwork for this departure was laid last year, when she seemed intrigued by the idea of traveling to India with Rose’s mother. Still, I’m sorry to see her go. She’s dreadful, but a constant source of amusement. Rose, however, is still kicking around. I didn’t love her storyline last season, and she sometimes feels like a weak replacement for Sybil. But I’ll give her a chance. Plus, I loved this outfit. 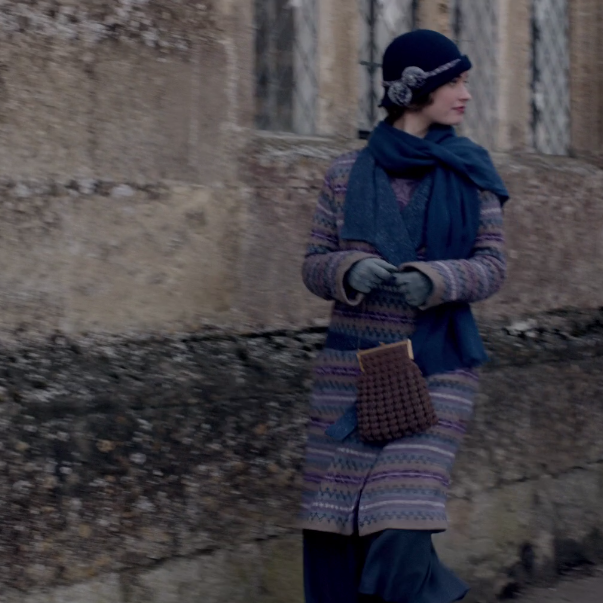 Rose attempted to find a new lady’s maid for Cora, and they ended up hiring back a former Downton maid, Edna. I needed my memory refreshed on Edna. She was fired after making passes at Tom, and treating him as an equal rather than respecting the family-servant relationship. Mrs. Hughes had given her a positive reference at Tom’s request, so Cora had no problem hiring her back. I hope this doesn’t lead to a romance between her and Tom, I just don’t see him behaving that way.

Rose and Edith, both in nice outfits.

Edith is still seeing her newspaperman boyfriend, and he wants to become a German citizen in order to have access to divorce. I really want a happy ending for Edith. She’s had a rough go, Sybil is dead and Lady Mary’s husband dead too. One of these daughters needs a win. Edith was killing it, fashion-wise, in this episode. The headscarves really look nice on her. 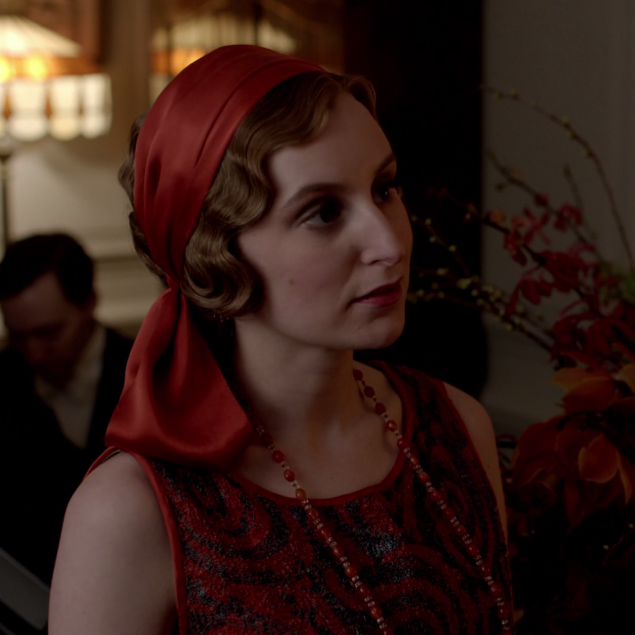 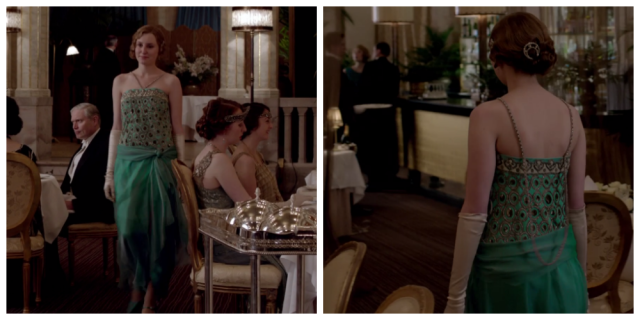 My favorite dress from the episode.