Are you competitive when it comes to playing board games? I am. It’s a flaw, I know…

So last night I hosted a family game night (at my sister’s house) for 10 members of my family.

I recently received an awesome Game On package from Mattel and my kit was personalized to my Gameology sign, it was time to plan a party. 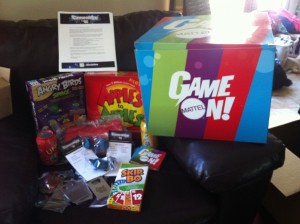 What’s your game sign you ask?  Mattel recently launched the Gameology Facebook App, the App determines your game sign, which tells you what type of player you are and which games fit you best. Are you an Activius with great physical prowess and a preference for games that require your hands?  Or are you a patient Strategicorn who believes in waiting for the right moment in the game to strike? I’m a Socialies although I do like to win but making sure everyone has fun is a priority. Follow this link to determine your game sign:  Apps.facebook.com/ gameology

We chose to play Apples to Apples. Now we’ve played it before and each time my 77 year old father won. EACH TIME! So it was time to dethrone him. And dethrone him we did! My Mom won the first game and I won the second and bragging rights until our next family game night.

The kids also played the Angry Birds and that kept them busy for a while, but they loved Apples to Apples. I was surprised how easily they followed along and how witty some of their plays were during the game. We had a lot of laughs!! We haven’t decided yet if our next game night will involve Pictionary® Dice or Uno. But whatever the game, you know we’ll have lots of laughs and lots of wine!!

Just take a look at the pics from last night. My family rocks!!! 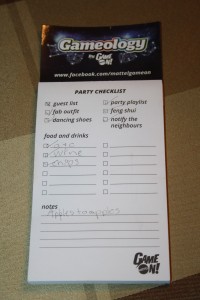 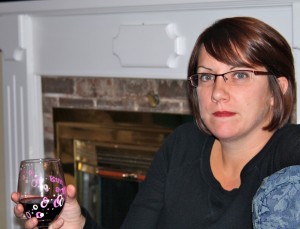 That’s me strategizing before the big game! 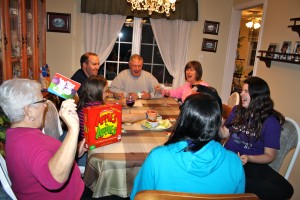 The fam, ready to PARTAY! 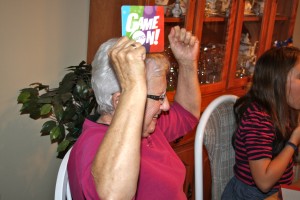 My mom wins round 1! 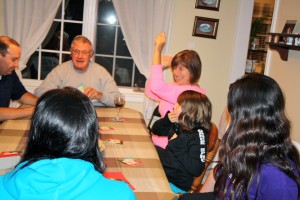 Beth must have won a green apple card! 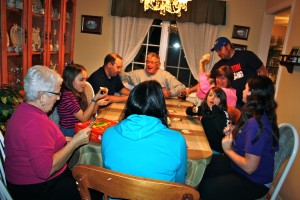 This party is out of control! 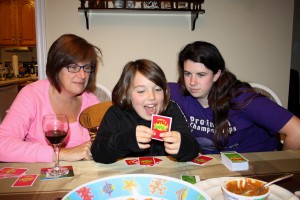