There was one other catch – to try something new. 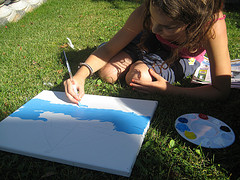 I got to thinking came up with the idea of asking kids to paint Halifax by asking a simple question: “What is Halifax?” Because kids see things differently than adults.

With Visa card in hand, I recruited my creative friend to join me at DeSerres to stock up on supplies. After spending $100.40 we walked over to Grand Parade to meet the rest of the kids and parents.

On the last official weekend of summer it wasn’t long before brushes were flying and creative juices were flowing as pigeons and tour groups looked curiously on. 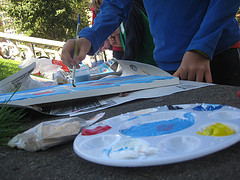 It took a few minutes for the kids to think about what they wanted to paint. They were inspired by such things as:
A Canadian flag on a building nearby.
A street sign.
A boat in the harbour.
The ship mast in Grand Parade.

It was fun to watch their creations take shape.

Here were six kids in the heart of downtown Halifax painting their city. Today they paint it, tomorrow they’ll shape it – the future lies with them. 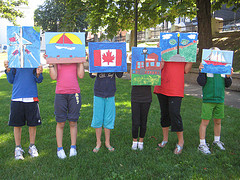 Wouldn’t it be interesting to invite the same kids back in 20 years to paint Halifax with their answer to the same question again?