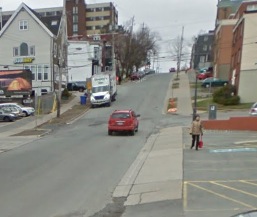 Police are looking for two males after a man was shot on Queen St in Halifax early this morning. From HRPD:

At about 1:00 am police responded to a report of a male who had been shot in the 1100 block of Queen Street in Halifax. Upon arrival it was learned the 35 year old male had been in his home when two males wearing masks forced their way into the residence and confronted him. As a result the victim was shot in the leg area and transported to the QE2 Hospital with non life threatening injuries. The suspects fled the area on foot, police K-9 searched the area but could not locate them. The incident is being investigated by the Integrated General Investigation Section.

Investigators do not believe this was a random act. A large quantity of marijuana was located at the scene and members of the drug section are currently assisting with this investigation.