I reviewed season one of Chuck for my first DVD Flashback Friday post, and I loved it. I was hooked on the show from the first or second episode, and stayed that way for the entire first season. I wasn’t sure what seasons two or three would have in store for me, though. I’d heard that a big “Save Chuck” campaign took place in order to get the show renewed for a third season, so I wasn’t sure what that meant for season two. Was Chuck a one hit wonder, like Heroes, or did it just suffer from bad ratings because jerks like me had no idea how good it was?
Well, now that I’ve seen all three seasons, I really regret not having watched it all along. How could I have been missing out on a show so funny, so original, so suspenseful? It’s fantastic!
Chuck vs. The Sophomore Slump? 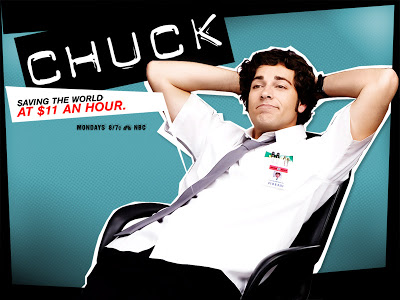 Season two, which ran in 2008-2009, aired 22 episodes. And I loved every single one of them. I wish NBC ordered 22 episodes every season, because I think the show could handle it. The third season, which has nineteen episodes, also managed to keep every episode feeling new and fresh. So why, then, has NBC reduced the amount of episodes in the upcoming fourth season to a mere thirteen?

In season two, Chuck starts to become more accustomed to his new life as a spy. It was a natural progression for the show and managed to make Chuck more interesting of a character. He starts to rise above the Buy More and become more involved with missions, but he can’t tell anyone why he’s acting so strangely. He misses family events, bails on social plans with his buddy Morgan and grows closer and closer with his handler, Sarah. I also think Chuck’s other handler, Casey, really came into his own in season two. He’s hilarious as the patriotic-to-the-core NSA agent who grumbles about having to work with Chuck and Sarah, but secretly cares about them.

Season two also focuses a lot more on Fulcrum, an agency made up of rogue CIA agents who are trying to build their own intersect. They have spies everywhere, from every US intelligence agency. Also in season two we see Chuck’s past come back to haunt him – his ex-girlfriend Jill enters the picture, and we learn a lot more about his complicated family. We also learn more about Sarah’s past, and Ellie and Awesome get married. 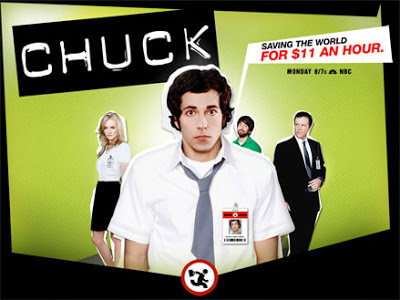 Season three is just as good as the second season, other than the constant, blatant Subway ads throughout the season. NBC and Subway struck a huge sponsorship deal after the “Save Chuck” campaign, and the result is a lot of Big Mike talking about fresh-baked bread and new sub styles and Morgan and Chuck playing video games over a couple of their favorite subs. It can be awkward, mostly because it’s so obvious, but hey – if it keeps Chuck on the air, then I’ll eat a roasted chicken 6-inch sub on parmesan oregano every Monday night just to make them think it’s working.

Season three was originally only supposed to be 13 episodes, which means I’m still holding out hope that season four will offer up more than what’s currently planned. Season three revealed that Fulcrum was just one part of an even bigger enemy organization called The Ring, and that becomes the focus of Chuck and the gang’s missions. Chuck also has to deal with new spy capabilities, and that is one of the ways the show manages to stay fresh in it’s third season. Throughout the season Chuck also has to deal with his family and friends getting closer and closer to his secret spy life. Chuck also has to handle a new love interest and a new handler.

The final two episodes of season three should be watched together, and more than once. They’re suspenseful, surprising and truly make for great TV. Honestly, I can’t believe I wasn’t always watching this show – and I can’t believe its ratings aren’t better. If you can, check out the DVDs and regardless, I highly recommend tuning in this fall and checking out a few episodes. You should be able to catch up pretty easily, and it’ll be worth it.