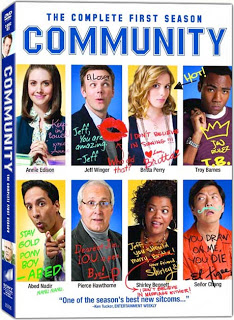 Man, how am I missing out on all these fantastic comedies? Earlier this year I caught up on Modern Family, and upon hearing countless glowing reviews of Community I decided to check it out. I watched every single episode within a few days (I watched all eleven episodes from the second season in one evening) and I now cannot wait for January 20 when the show’s second season starts up again.
Community is about students at Greendale Community College who form a study group. The main character, Jeff Winger, creates the group as a guise to get close to a hot blonde classmate, but the group soon becomes the real thing. 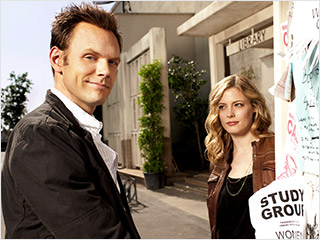 I love the characters on Community. Joel McHale plays Jeff Winger, a slick lawyer who has to go back and get his undergraduate degree after the bar association finds out he’d faked his. He’s the ultimate cool guy and the leader of the pack. He creates the study group to get close to Britta Perry (Gillian Jacobs), a girl in his Spanish class. Britta’s character isn’t particularly likable – she’s kind of self-righteous and is known in the group as a buzz kill – but she’s still funny and has a great rapport with Jeff. 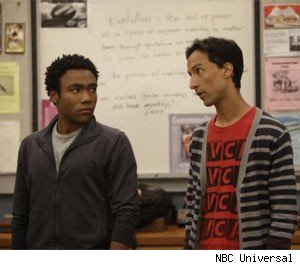 Abed Nadir (Danny Pudi)is one of the best characters on the show, and really is one of the best characters on TV right now. He’s a pop culture addict (so I can relate) who probably has Asperger’s (OK, I can relate to an extent) and constantly treats his real life as though it’s a TV show. What’s great about Abed is that he allows Community to make self-aware jokes without being one of those annoyingly self-aware shows. Abed has a fantastic friendship with Troy Barnes (Donald Glover) a high school football star. Throughout the course of the show he becomes less a jock and embraces being a bit of a nerd. He and Abed are always doing kooky things together. 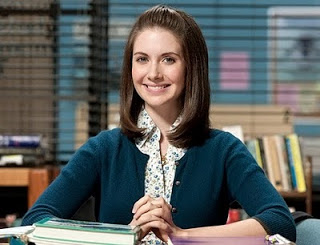 Annie Edison (Alison Brie) went to high school with Troy, but she was much less popular. She had a problem with prescription drugs and had a nervous breakdown in high school. Annie’s my favorite character on the show, and I love how Alison Brie (who also plays Trudy on Mad Men and should totally be really, really famous by now) plays the straight-laced character with such comedy. Annie’s like a combination of Rachel Berry, Emma Pillsbury and Rory Gilmore – smart, studious, unintentionally hot and rather intense. 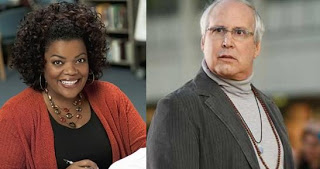 Shirley Bennet (Yvette Nicole Brown) is another of my favorite characters. She’s a recently divorced middle-aged mom who is both incredibly sweet and incredibly religious. Her somewhat fanatical religious views cause occasional rifts in the group (no one else in the group is Christian) and she also has a penchant for gossip. Pierce Hawthorne (Chevy Chase) is the oldest student in the group and has a rather inappropriate obsession with Shirley. Pierce is hilarious because he’s so inappropriate and has a very deluded self-view. He’s not my favorite character, but I love what his character adds to the dynamic of the group. 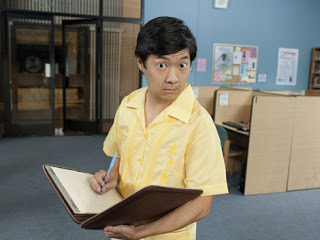 There’s only one character on the show that I really don’t care for – Senor Chang, the group’s Spanish teacher, played by Ken Jeong. Most of this stems from the fact that I’ve never liked Ken Jeong and find him way too over-the-top in everything he does, even commercials. Luckily he’s not around too much (especially in season two) but recent plot developments have me worried that he might start getting more screen time. However, Chang doesn’t ruin the show for me. Unlike 30 Rock, which I can’t watch because I find Tracy Morgan so unbelievably annoying, Chang is a minor enough character and has enough kinda-funny moments that he doesn’t ruin the show for me.
There are lots of other hilarious recurring characters, and one of my favorite things about Community is the amount of pop culture references the writers fit into each episode. This isn’t a show you watch while you check your email or read your Twitter feed, because you’ll miss all the little jokes.
Perhaps it’s because both shows began at the same time, but I hear Community be compared to Modern Family a lot. If I had to choose, I’d say I like Modern Family a little bit more. There are no characters I dislike on Modern Family, and it is one of the few comedies I watch that doesn’t rely on a will-they-or-won’t-they romance. Especially in it’s first season, Community focuses a lot on whether Jeff and Britta will get together. (And for that matter, whether Jeff and some other characters will get together, too.) The characters have chemistry, but it’s something done very often in sitcoms. We have Jim and Pam on The Office, Ted and Robin in How I Met Your Mother, Leonard and Penny in The Big Bang Theory, etc. I think Community really grew as a show in the second season when it didn’t focus as much on the romantic possibilities. (And I think Abed would agree with me.)
That said, I am so happy I’ve finally started watching this show. I tried to keep this review pretty spoiler free, but I’ll be reviewing individual episodes from now on. Next up I think I’ll have to check out Parks and Recreation and possibly Cougar Town as well.