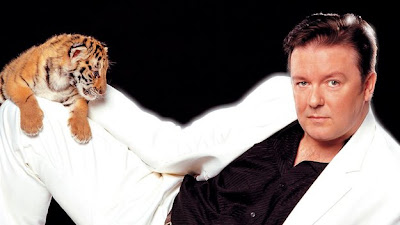 I have a dirty little secret.

I actually like the American version of The Office better than the original British version. I know, I know. I’m ashamed. I hate this about myself, but it’s true nonetheless. I didn’t expect it to be this way. I love Ricky Gervais. I see his movies. I listen to his podcasts. I expected to think that his original version of The Office blew the American one out of the water.

The problem was, Ricky Gervais was not the problem. He was very funny. It was the supporting cast that I couldn’t get behind, and that ended up being my problem with Extras as well. Though I liked Extras better than The Office, I had the problem with both series that I didn’t really like any other character but Gervais’. And I usually didn’t find them funny.

On the American version of The Office, I find all of the supporting cast hilarious. Dwight, Phyllis and Kelly routinely crack me up. And I root for Jim and Pam. In the British original, I don’t root for any of the characters. I don’t like them. I don’t find them that funny. So while Gervais is hilarious, the show just didn’t do it for me. I had higher hopes for Extras, and I’d say I enjoyed the series but am not obsessed with it. 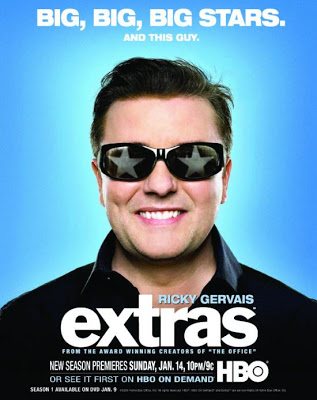 Extras aired on the BBC and HBO for two seasons in 2005 and 2006, and aired a Christmas special in 2007. Gervais plays a struggling actor, Andy Millman, who can only land parts as an extra in films. Each episode features a guest star – usually an actor portraying an unflattering version of themselves as the star of the film Millman is working on.

Ricky Gervais is hilarious as Andy Millman, and I often found the guest stars hilarious as well. My problem with the show was in the supporting cast. Andy’s dimwitted friend Maggie and his blockheaded agent Darren Lamb became so exasperating that I couldn’t believe Andy would continue to associate with them, and a lot of the time I just wished they’d go away.

Aside from this, the show is funny – especially when Andy interacts with stars. My favorite guest stars were Kate Winslet (who hilariously tells Andy she needs to get a role in a Holocaust film so she’ll be a shoe-in for an Oscar – a few years later in real life, she wins for The Reader, a Holocaust film), Orlando Bloom and Daniel Radcliffe.

Toward the end of the first season Andy scores a deal to write and star in a sitcom for the BBC. Originally it sounds as though the show will be very similar to Gervais’ previous show The Office (the main character’s catchphrase is “Are you havin’ a laugh?) but as the second season progresses the show gets twisted into something Andy Millman is not proud of. Andy Millman as a lower B-list celebrity acting on a show he hates was a hilarious direction for the show to go in, and I liked how things were wrapped up in the finale.

Both seasons are only 6 episodes long, which makes it a very easy series to watch. I enjoyed Extras and found it funny, but I can’t say it will make the list of my all-time favorite shows.