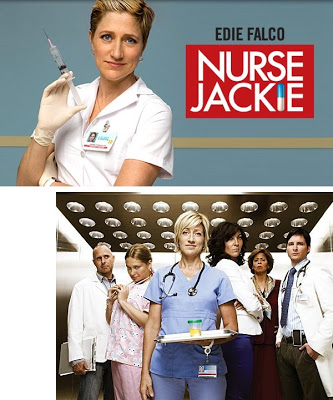 I started watching Nurse Jackie several months ago when a website I write for sent me the season two DVDs to review. I rarely watch seasons out of order, but I made an exception so I could get the review done. Luckily, the show grabbed my interest quickly and was easy to get up to speed on. On the downside, since I immediately downloaded the first season after getting hooked on the show, the timeline of the series is a little jumbled in my head.

Nurse Jackie stars Edie Falco and the third season is currently wrapping up on Showtime. It’s one of those half-hour dramadies that drive people crazy come Emmy time, because it’s not an hour-long drama, but it doesn’t fit in the comedy category either. It is, however, a good show and Edie Falco is excellent in it.

Falco plays Jackie Peyton, an ER nurse at a hospital in New York. There are two things you need to know about her. One, she’s really damn good at her job. Two, she’s a drug addict.

The show has a dark sense of humor, and I love it. And the cast is outstanding. Eve Best plays Jackie’s best friend, the glamorous British doctor Eleanor O’Hara. I just love her wry sense of humor. Merritt Weaver is hilarious as the super-positive new nurse Zoey, and Peter Facinelli plays the ridiculous Dr. Cooper perfectly. You kinda hate him, you laugh at him, and you mostly feel sorry for him.

Jackie’s home life is somewhat of a mess. Her husband, Kevin, is kind and patient but Jackie has often cheated on him with Eddie, the pharmacist at the hospital. She has two beautiful daughters, Grace and Fiona, but Fiona is battling an anxiety disorder.

The show is smart and witty, and has a very sweet side despite the dark humor. There have been a few bumps in the road, though. One of my favorite characters, Mohammed “Mo-Mo” de la Cruz, was inexplicably dropped from the cast after the first season. I understand that things can happen behind the scenes, but come on. Throw me a line about how he transferred hospitals or something, don’t just pretend like he never worked there!

And while I very much liked seasons one and two, I haven’t been thrilled with season three so far. I won’t give too much away as I do recommend watching the show if you have a chance, but I’d hoped Nurse Jackie would take a few more risks when it came to story arcs this year than they have so far. The show has been renewed for a fourth season, and I think in order to keep things fresh they’re going to have to mix up the formula.

Do you watch Nurse Jackie? What have you thought about this season so far? Were you surprised it got renewed when United States of Tara was canceled? Let me know in the comments section!