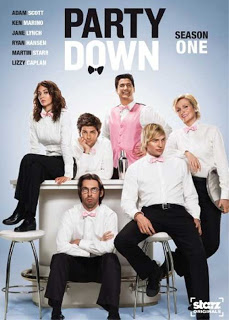 DVD Flashback Friday is back and will be a recurring feature every Friday this summer. If you’d like to submit a guest post for the blog, head on over to the Contact page and send me a note!
A few months ago, I checked out Party Down on DVD. Party Down originally aired on the Starz network in 2009 and 2010, and there are only two seasons.
For someone who’s a fan of Veronica Mars like I am, the show is a kick to watch based on casting alone. The show was created and written by, among other people, Rob Thomas, who was responsible for my favorite teen sleuthing show.
I’d heard a lot about Party Down before I actually watched it, and I’m worried the hype might have oversold it a bit. It is a very funny show, I just don’t think it’s up there with my favorite comedies. The cast is great, and the writing is good. I’m not sure why exactly I was never blown away by Party Down, but it is a perfectly suitable comedy. 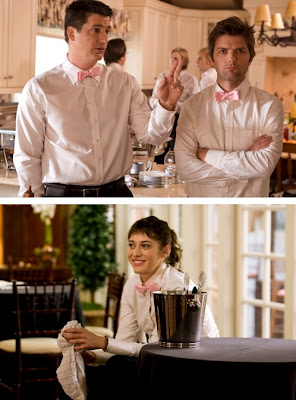 The show revolves around a group of caterers in Los Angeles. Most of the waiters are aspiring actors, writers, comics, etc.
As I said, the cast is fantastic. Adam Scott stars as Henry Pollard, a washed up actor known for one commercial with a memorable catchphrase – “Are we having fun yet?!” Ken Marino, who Mars fans will know as Vinny Van Lowe, plays Ron Donald, the former screw-up and now “team leader” of the catering company Henry rejoins after abandoning his hopes of a real acting career. Lizzy Caplan (you might know her from, among other things, Mean Girls, The Class or True Blood) is great as Casey Klein, an aspiring comic and Henry’s love interest.

The supporting cast is colorful and quirky. Ryan Hansen (Dick Casablancas on Veronica Mars) is hilarious as Kyle Bradway, a dopey blond struggling actor, and Martin Starr (Bill from Freaks and Geeks!) is a great foil as Roman DeBeers, an overly serious, overly confident struggling sci-fi writer. We also get to see Megan Mullally (Will and Grace) as stage mom Lydia, Jane Lynch as bizarre has-been Constance, and Jennifer Coolidge as Constance’s friend Bobbi St. Brown.
There are also fun guest appearances from many Mars alums, like Enrico Colantoni (Keith Mars) and my pretend boyfriend, Jason Dohring (Logan Echolls). Kristen Bell (Veronica herself) makes several very funny appearances as another love interest for Adam Scott’s character.
With a cast like that, you can’t really go wrong. There are also fantastic people involved behind the scenes, like the aforementioned Rob Thomas, plus Paul Rudd and Fred Savage. So why don’t I like the show more? I guess it’s not that I don’t like it – in fact, I thought it was downright hilarious – I just didn’t find the series very memorable. It’s fun, witty and easy to watch. But it’s not up there with my all-time favorite comedies. The only reason I can come up with for this is that with only twenty episodes, I didn’t have a chance to feel very invested in most of the characters. It’s the kind of show that’s outrageously funny, but doesn’t win over my heart the way some other comedies have.
I do recommend watching the series, though, especially in the summer while there’s not much else on. It’s well-written and very funny in a wacky, original way. The series goes by quickly, since there are only twenty episodes at about 25 minutes apiece. In fact, I might give it another try myself sometime. Maybe then it’ll make my top ten comedies list.