which you can find here, and you might have seen her comments on Couchtime from time to time. So for today, she’s got some great insight on one of my new favorite shows, Cougar Town. Here’s Dana! 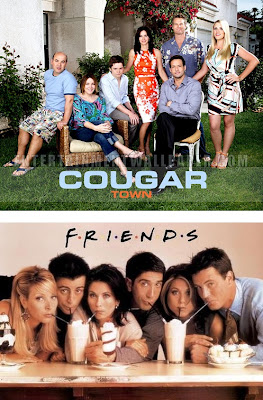 OK, Jill again. Love this post! I think Dana’s spot-on with the Gunther/Tom comparison. Cougar Town really is a grownup, wine-guzzling version of Friends! And, I love it. I agree about Courtney Cox vs. Jennifer Aniston as well. Sure, Jennifer Aniston makes movies, but I can’t stand almost anything she’s been in. Her rom-coms have completely turned me off of her as an actress, and I think she would be well-served by following in Courtney’s footsteps and finding a great TV show for the next step in her career.