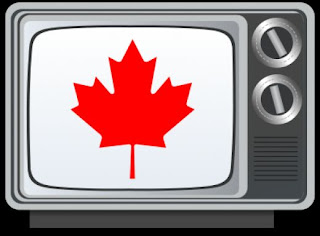 It’s Canada Day! Yes, it’s that time of year again to eat, drink, be merry and remember how awesome it is to be Canadian. There are a lot of reasons – free health care, friendly and polite people, great local music, art and culture. I could go on, but I won’t.

Instead, I’ll make talking about Canadian television an annual tradition. Last year, I confessed that I barely watch Canadian television.Well, I’m sorry to report that very little has changed, but this year I am prepared to tell you what my favorite Canadian show is.

Steven and Chris. Haven’t heard of it? Perhaps some of you have, but I’m guessing most of you will be unfamiliar with it. Steven and Chris is a daytime talk show on CBC, and it is simply delightful. It’s hosted by – OMG how did you guess? – Steven and Chris. They used to be on a show called Designer Guys and have been making their talk show since 2008. 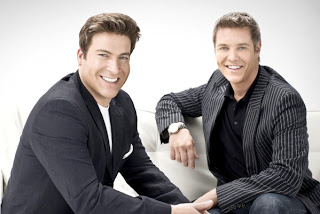 Steven and Chris are both openly gay and are a couple off-screen. And they’re freakin’ hilarious, especially Chris. I just love their chemistry and their self-deprecating humor. They talk about everything on the show – sex and relationships, food and health, style and decor. And they actually have good taste! Because, frankly, I refuse to watch any talk show that recommends I mount a television above a fireplace. I love TV as much as the next girl (OK, OK, you guys, I totally love it more than your average Jane) but it is not a work of art. Especially when it’s turned off which, believe it or not, does occasionally happen. Anyway, I digress.

Admittedly, I don’t get to watch their show a lot. It’s on during the day, when I’m at work, and I haven’t taken to recording it. But my mom does, and I’ll occasionally check out a segment or two with her. And, of course, should I ever be so unfortunate to spend a day home from work with the flu, I definitely tune in. (There are only a few perks to being sick – people will basically do anything for you, and you get to watch fun daytime TV that you rarely get to see.) Luckily, though, their website is almost as great as their show. They have recipes and tips (check out this one for a Classic Gin Fizz!) and you can actually watch episodes of the show online, which is super fun.

So even though I haven’t started watching very many scripted Canadian television, I am a huge fan of this particular Canadian gem.

Happy Canada Day, fellow Canadians! Hope you enjoy the holiday, and feel free to chime in in the comments section with your favorite Canadian programs!