A few days ago I got one of those texts that brings a smile to my face.  A good friend of mine who used to live in Halifax was back in town for one night only. She always seems to come on a Wednesday too; generally Onyx is our stop of choice.  This time, however, she was interested in trying something new, something “mad tasty”. Since like me, she was a big fan of Bish, I suggested that I introduce her to the Bicycle Thief.

We met at 5:30; she had a flight to catch at 8.  The early bird gets the worm, so we got a nice spot on the patio.  We chatted for 20 minutes or so before even opening our menus, but once the server came by for the 3rd time we decided to stop being so annoying and placed an order: Propeller Bitter for her, and a Montes Alpha Chardonnay since I was planning on the corn and lobster chowder.  My friend went for the Lobster ravioli.

Her ravioli were lovely – two big pieces, stuffed full of lobster in a rich sauce.  There was also a huge lobster claw on the plate.  And, in the grand theme of lobster, my chowder was also delicious.  With a good amount of lobster meat, there were sweet corn kernels, smoked bacon and chunks of potato that absorbed the flavour of the broth. 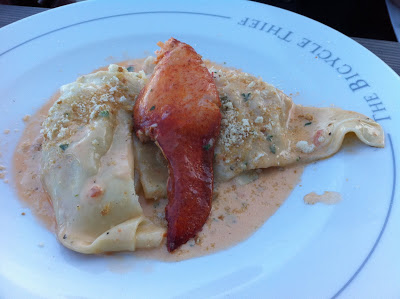 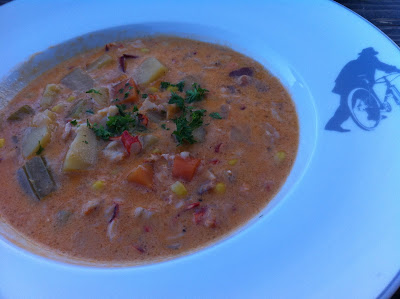 I was too full for dessert, but my friend has a weakness for lemon, so she chose a slice of the lemon-meringue pie.   I can’t quite remember all the details, but I’m pretty sure the crust was made with brown sugar, giving it a deeper flavour that contrasted well with the tart lemon. Ever since a piece about tea came out in a local weekly newspaper, I’ve been a bit of a coffee snob – only going for the best.  Since I was feeling coffee deprived, I ordered a cup of the Bicycle Thief’s Illy coffee and it was just what the doctor ordered, perking me up for a long night of studying French wines.