Anthony: When it comes to the east coast and style, there are several schools of thought. For some, the creativity that results from clashing cultures is a chic (and enviable) result. I’m talking the pseudo-hipster, collegiate set that can be seen about town in their fitted cardigans, flat brimmed hip-hop inspired baseball hats, and skinny denim. Or the ladies who prefer everything two sizes too big, look as if they were caught in an earth-tone gang bang, and spent (at most) 10 minutes rolling around on their bedroom floor until enough clothing stuck to them; and to top it off, they slap on some oversized Buddy Holly specs, of course.

And then, there is the group of people who despise these fashion ideals and go out of their way to look prim and proper, with every accessory in its place, painfully coordinated to appear as natural as rosy cheeks on an infant. You know who I’m talking about. ‘Course, you could take a page from my notes, and wear the first three things you see in the morning. Either way, east coast style is definitely distinct. Hell, the Beach Boys give it a shout out in ‘California Girls’. (*that’s girls with an ‘I’, not a ‘U’) 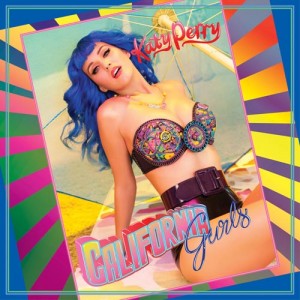 Somehow, I get the feeling this is not the hip style the Beach Boys were diggin’ on.

But, despite the eternal struggle of what is truly ‘chic’ for the east coast, you can’t deny that employing nautical tendencies into your wardrobe always ups the game you bring to the table. Maybe it’s the affinity I have to the casual, windswept style a cable knit sweater, deck shoes, and khakis create… or maybe it’s because of photos like this one of Jeremy Irons: 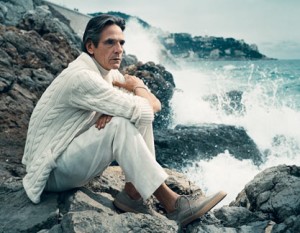 This silver fox is like a silver bullet to my pants.

…but you all know I’m right.

The key element for this look, however, is the shoe. Specifically, the deck shoe. Personally, I was never married to the classic brown colour – I always felt it was too close to a loafer – so I love a nice grey or navy shoe. Besides, I didn’t go to Fair Harvard. And right now, you might be stealing a glance to your shoe rack, searching for the deck shoes you bought last year, trying to justify why they’re in the brown family of colours. It’s OK, I don’t blame you. Brown goes with everything and like I said, nothing is more classically east coast.

But for the occasions that call for a little more pop, a touch of pizazz even, I’m going to say one word: Rockport. “Yeah, yeah”, you’re saying, “thanks for the groundbreaking tip”. Well, sure Rockport is an institution for sailing footwear, but I bet you haven’t heard or caught a glimpse of their limited edition Morgan Coast shoe. 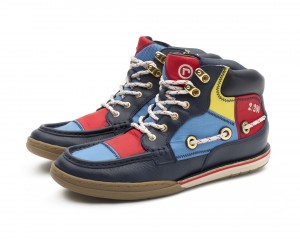 I daresay I could conquer my fear of boats with these kicks. Or, at the very least, look fashionable when I’m crying into a tumbler of whiskey below deck.

At a first glance, I know they essentially look like high-top deck shoes, but keep staring. Trust me. I’m picturing myself strutting down Commercial Street in Provincetown on a hot summer night. People spilling out of pubs and pizza shops, dancing, laughing. Maybe there’s a drag queen or three waving their boas in your face and telling you about the drink specials at Wave Bar. Purely speaking hypothetical, of course. *ahem*

I’m dancing, I’m laughing with my friends, we’re spilling drinks and talking about hitting the beach at sunset, and for this, these shoes are pretty much perfect. They’re colourful, as they should be because I’m not in Martha’s Vineyard; they’ve got structure so no one is stepping on my heels; and when we finally take that tipsy stroll along the sand, I’m not getting any of that business trapped in my shoes. 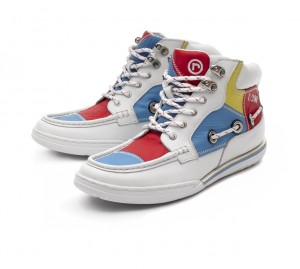 See that high-top style? I like to call that ‘The Sandblaster’.

Am I fan of the Morgan Coast? Yes, and unfortunately they won’t be available on the west coast. In fact, these bad boys are so limited edition, they’re only available at Rockport shops in Laval, Toronto, and Halifax. Personally, I’d go with navy over white; I prefer the natural colour rubber sole. But either way, these are some serious spring/summer kicks. Deck shoes inspired by the east coast, only on the east coast – it’s classic.