L-A: Y’all, I’m sick this week. Like, took a sick day and it still lingered around for days kind of sick. The kind that isn’t sick enough to stay home anymore, but just enough to make it hard to exist. And to annoy your co-workers as you go through a a box of tissues in two days. So forgive me if I’m a little light on favourites.

GQ for being mildly d-baggy.

So, I’m at the drug store buying lozenges, multiple packs of tissues and some nail polish when I see this: 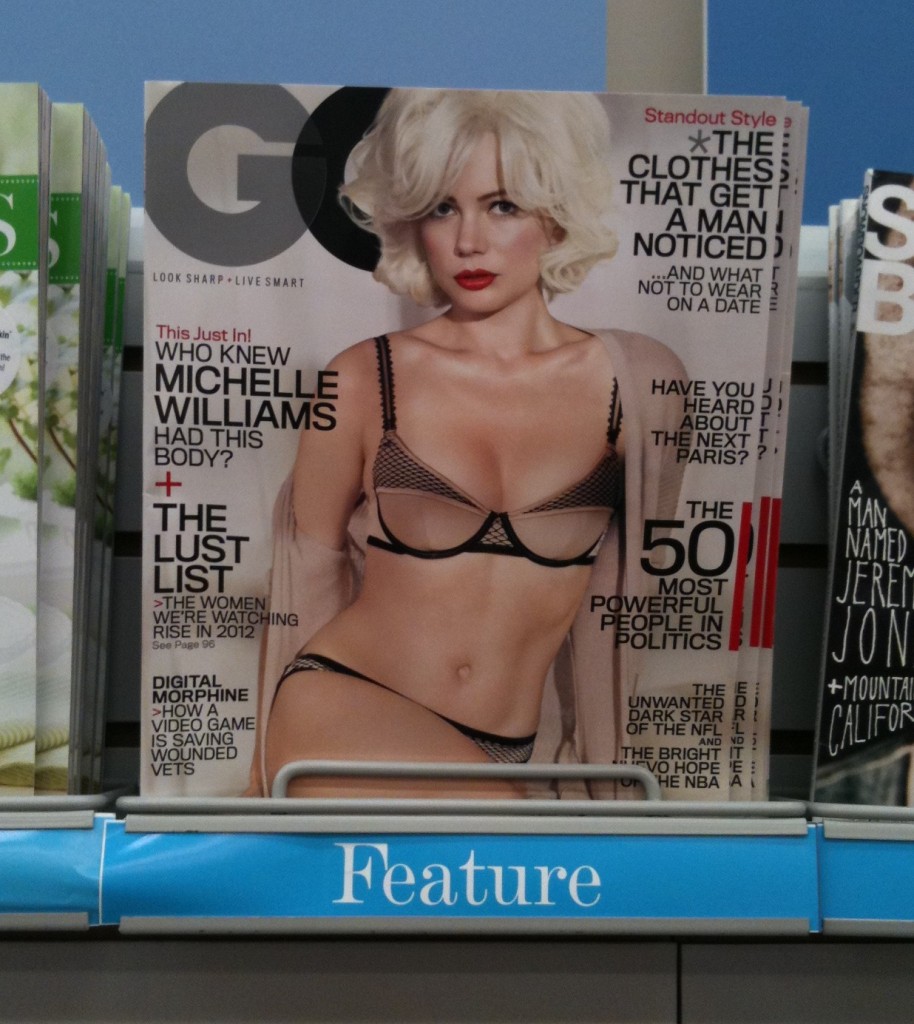 And I was prepared to write it off as unklassy, but whatever, sex sells blahblahblah. Until I’m listening to Pop Culture Happy Hour and they start talking about the amazing piece of profile writing in GQ this month about Michelle Williams. So I head over to GQ to see more about it. And this is still how they’re selling great writing:

It seemed crazy at first. Michelle Williams as Marilyn Monroe? Come on. We knew Williams could act—but could she make us drool? America, we have our answer. Meet the winner of GQ‘s (okay, yes, unofficial) award for best actress

For all intents and purposes, they’re pitching this story to me like they’re Maxim effing magazine. It’s not the pseudo-risqué photography that’s got my knickers in a knot. It’s that they can’t bother to at least write some headlines that actually touch on the actual story (they talk Heath Ledger) or that they’ve allegedly got some great writing there (I haven’t read it yet, but I do trust the folks at Pop Culture Happy Hour). So, for that, I’m officially frowning at you GQ. 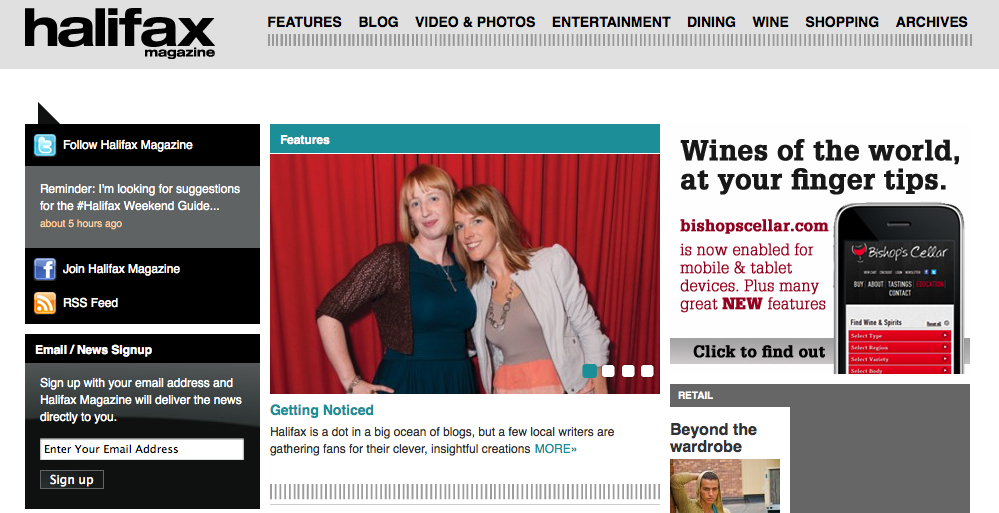 That’s us as a feature story. No bigs.

So is Ben (but you already knew that) and The Vegan Butcher. And so are the other bloggers in this city. When Kim interviewed us, we were happy to answer questions and forget about it. And then boom! We are in the middle of an awesome story and oh hey! that’s a photo of us!

Right…so they kicked off their year of the pattern with stripes. 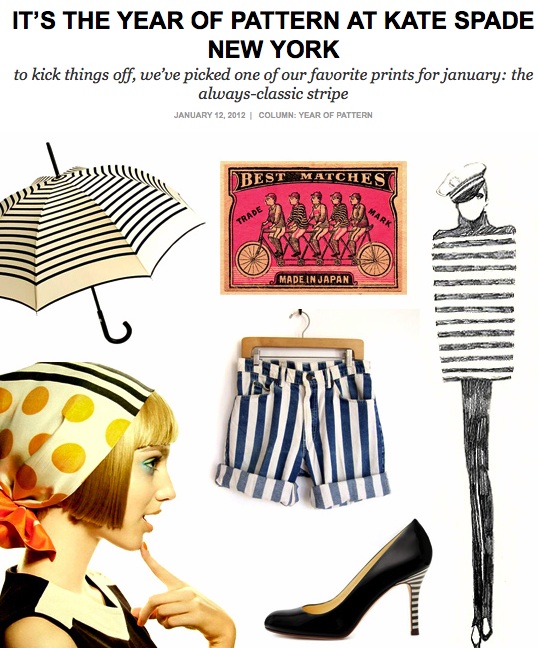 So that means, my birthday month was full of nautical and stripes over at Kate Spade. It’s a wonder I didn’t go stark raving mad and just buy one of everything. Particularly the nautical jewelery (which comes in a necklace, bracelet, ring and earrings…you know I want to collect the whole set). 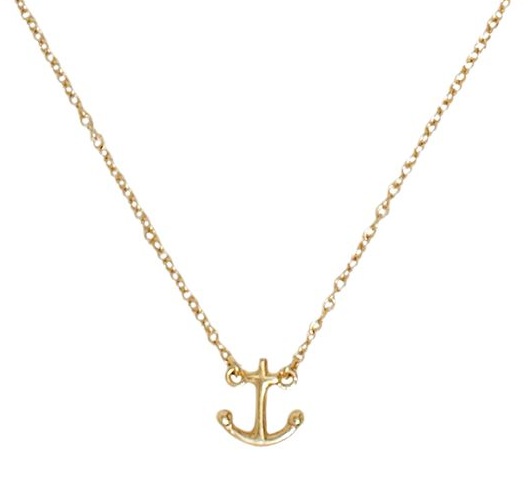 In the meantime, I got a cute anchored number from Jewelmint. This is merely a stop gap. I still want the whole set.

3. Rachel Bilson is pretty much the most adorbs.

As much as we love us some Marissa Cooper round these parts, Summer Roberts will forever be our homegirl. 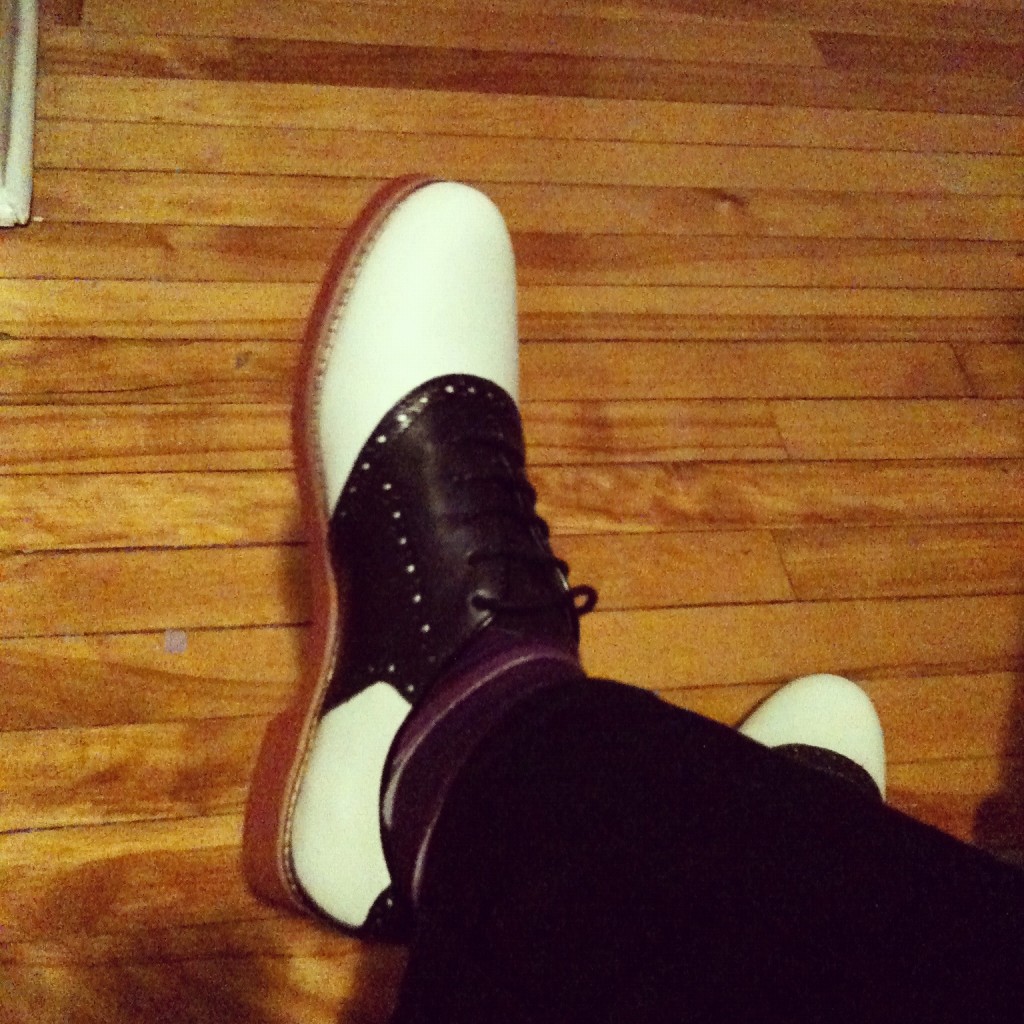 Oh hells yes. They are totally mine. (but not with those particular jeans). And I will eventually write an entire blog post about them (when the weather is better and I can take them outside for a “photoshoot”).

And now on to covet something new. I will put that new covet out into the universe like I believe in the Secret or some junk and it will totally become mine (because I won’t shut up for years and I’ll start sending links to people around gift giving holidays).

Ally: Yay to Friday! Fairly big snowstorm about to hit Halifax so I’m stoked to home-office-it for the day. Speaking of home offices, Ben and I have decided to co-write a post to be published on one or both of our sites called, “How to Operate with the Self-Employed/Entitled”. It will include helpful pointers such as, “We don’t do rush hour.” Wait for it.

I don’t have many favourites this week, and I don’t want to hold up the publishing of the post, so I’ll just take you direct to the Crappy Pop Video of the Week with a promise that I will have funny things to say next week (or at least I will be funny in my own head).

Look, judge me all you want for my pretend crushes on douchey rapper types, but I know enough to know that Pitbull is all kinds of wrong. How is he famous? Selena Gomez could “rap” better than this. In fact, I think she does:

Favourite Friday – the Jan 27th edition – In which L-A finally shuts up about saddle shoes
https://haligonia.ca/favourite-friday-the-jan-27th-edition-in-which-l-a-finally-shuts-up-about-saddle-shoes-53483/