I watched a little of Saturday Night Live this week with Ed Helms, but I went to bed after the gross misuse of Chris Colfer (they drag him all the way out there and then we barely see him?!), so I was curious to see what Allison would think of the rest of the show. Without further ado, here’s her latest SNL review! 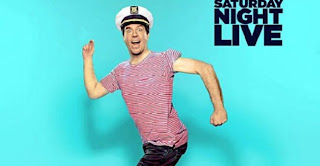 I have been a fan of Ed Helms since his days at The Daily Show with Jon Stewart. I would always think of him as the guy who wore glasses who wasn’t Stephen Colbert. I wish old Daily Show clips were available to show because he has some pretty good moments. And don’t forget how cute he is as the geeky and awkward Andy Bernard on The Office.
Opening Skit- Situation Room
I guess Obama is on a bit on a streak now, so this was funny to examine how far Obama can go after the whole killing Bin Laden thing.
Monolouge
Oh, that was a long, boring story about baton twirling. Oh wait, as I wrote that sentence he just took off his suit to reveal a purple leotard and did a baton twirl. That took that monologue from a 3 to at least a 6.5.
High Fructose Corn Syrup PSA
I have seen the original commercial this was parodying, and it horrifies me to think that when I have kids I will have to deal with judgmental moms. At parties, PTA meetings, soccer practices. OK, getting a little ahead of myself. Anyway, the commercial itself is pretty funny on it’s own so there is no need of a parody except to see Bobby Moynihan dressed up like a beefed up little six year old girl.
What’s up with that (Must watch)
Those small taps of the symbol can only mean one thing. What’s up with that? The BET show that has a catchy theme song that never seems to end. Tonight’s special guests Paul Simon, one of the Glee kids, and of coarse Lindsey Buckingham played by Bill Hader. These sketches are so repetitive but I always love them. Just watch Jason Sudeikis dance and tell me it doesn’t hypnotize you. Ed Helms appears in this sketch as Captian Sexy banjo and wow, Ed Helms can really wail on that banjo. Then the real Lindsey Buckingham shows up and plays his killer guitar section from Looking out for Love. One other thing to watch out during these sketches, how progressively sweaty Kenan Thompson gets. 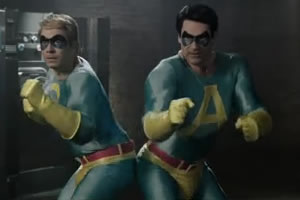 TV Fun House – The Ambiguously Gay Duo (Must watch)
I remember watching this when I was 10. I recall not getting half of the jokes in it, but hey I was a kid who liked cartoons. So apparently the flesh ray causes the cartoon world to become live action, which in turn gave us chock-a-block cameos. Jimmy Fallon and Jon Hamm are Ace and Gary and two of the evil scientists are played by Steve Carell and Stephen Colbert. Factoid: Did you know that it was Steve Carell and Stephen Colbert who voiced these cartoons? Those two have been friends for so long. So it makes sense that they were in it. So Ace and Gary have to save themselves from a giant moray eel, while Ace holds it between his legs Gary has to try and strangle it. Which prompts the classic line, “What is everybody looking at?” “Nothing!” This skit was a nice trip down memory lane and this time I got the jokes.
Weekend Update
Again it’s hard to review these, so here it goes:
Seth’s three guests were Bobby Moynihan’s “Second-Hand news,” Garth and Kath, and Jay Pharoh’s Will Smith. Garth and Kath are characters that are now on the verge of getting annoying. Maybe it’s because I am jealous of Kristen Wig and how awesomely hilarious she is. I thought they should have used Paul Simon to be a third singer but sadly, no. “Second-Hand News” is always delightful because of Bobby, can you tell I am a huge fan of this guy?
Poker Game
They haven’t done this sketch in a long time. Four guys sing-a-long to a song while telling stories of what the song reminds them of. Usually, it reminds them of something disgusting.  They have done this sketch a few times and the thing I always look out for is how they end it. This time they chose a “human centipede theme.” Gross, yucky.
Ann Margaret
I really don’t think too many people know who she. I feel like the writers probably thought, “Crap, we have two extra minutes to write, I know, just get Kristen to dance.” And that is how this sketch came to be. Watch this clip and see the similarities in the dancing.
So Ed Helms didn’t stand out too much on the show except for his banjo skills. There are a few skits I didn’t bother reviewing but most of these skits are online. So check them all out.
Next week is Justin Timberlake as the host and Lady Gaga will perform. Can you say epic? Until next week, thanks for reading.

I’d read that Ed Helms wasn’t used much on this episode of SNL, and it looks like Allison feels the same way – which is a shame, since I think he’s very funny. I’m a little bummed that I went to bed before John Hamm appeared though, since I absolutely adore him. I’ll have to check that one out online. I’m REALLY excited for next week’s show – Justin Timberlake is one of my favorite guests, and I really hope Lady Gaga does a couple sketches. Can’t wait to read Allison’s review of that one!

Ed Helms on SNL: Man, that guy can wail on a banjo
https://haligonia.ca/ed-helms-on-snl-man-that-guy-can-wail-on-a-banjo-37921/