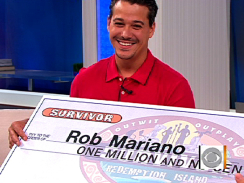 If you missed it, be sure to check out my review of the Survivor: Redemption Island finale. Rob Mariano won a million bucks, which is how it should be. But what happened after it was all said and done? Well, let’s talk about the reunion show.

Do you think Natalie really thought she had a shot at winning this thing? Of course she had to say yes when Probst asked her, but I think she must have known that things hadn’t developed in her favor. She was holding back tears as she sat in third place, but I think she was either overcome with emotion or disappointed that she didn’t receive a single vote.

It was interesting to learn from Ashley that they knew Rob had an immunity idol, but I wish Probst had asked her why she didn’t band together with Andrea and Natalie to vote out Phillip instead. Was it because Natalie wouldn’t go for it? Did she really believe she was going to go to the final three with Rob and Natalie? These are things I’d like to know.

I was surprised that Grant was holding such a grudge against Rob, because he seemed like a pretty mellow guy over the course of the show. Frankly, I thought it was immature and petty of him to judge Rob based on his game play. Grant said he felt that how you play the game is a direct reflection of your life, but I couldn’t disagree more. I know I’ve never played the game, but I don’t think you have to have played Survivor to understand that it’s a game. I’m always irked by players who try and treat it like it’s real life. Yes, real friendships and relationships can be built in the context of the game. Boston Rob would know that better than anyone, since he met his wife on the show. But just because Rob plays a strategic, cutthroat, take no prisoners game doesn’t mean he’s a bad person. Do you judge someone’s moral fiber based on a game of Monopoly? It’s not against the rules to lie or betray in Survivor, and just because someone backstabs you in the context of the game doesn’t mean they are a disloyal person in real life. I don’t think Rob deserved to have his character questioned – his wife was sitting in the audience with their two children, and I think she’d argue that he’s a pretty good guy.

Furthermore, Rob never said anything bad about Grant to the camera. He never said “What a schmuck this Grant guy is, following me around like a lost puppy. I can’t wait to cut his throat!” In fact, when he voted Grant out he said he hadn’t wanted it to go down that way. Sure, Rob never wanted to go to the finals with Grant – Grant was too strong a player. But he obviously respected him as a person. Grant should have shaken Rob’s hand and put the game behind them. 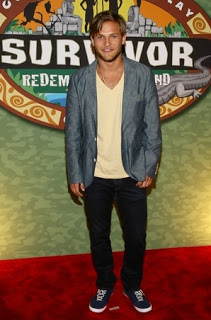 I was glad Matt at least acknowledged that he hadn’t played the smartest game. He said his strategy going into the game was to blindly follow his heart, which sounds like one of the worst strategies I’ve ever heard of. But at least he also admitted “Following your heart doesn’t necessarily mean ignoring logic and reason.” I felt like Matt kind of copped out on decisions in the season by attributing everything that happened to God’s will. It was nice to see him actually take ownership of his decisions in the game.

Everything involving Phillip was completely and totally bizarre. The guy is actually a federal agent? And that picture of him in the army in 1984 was hilarious. The season is over, and I’m still completely puzzled by Phillip. He spoke well at the reunion, but he acted like a lunatic during the final tribal council. I don’t think they’d let him on the show if he had real mental health issues, so what’s the deal here? (Also, it totally looked like Adam Scott from Parks and Recreation was sitting behind the woman who vouched for Phillip’s career as a federal agent.)

Russell, of course, had to take the opportunity to chastise his tribe for throwing the challenge again, and to make sure that Probst knew he would come back for another season. I’m pretty sure if Russell appears on Survivor again I’ll have to take a hiatus from the show. I am so over him.

As for the Fan Favorite, I knew it would come down to Matt and Rob and I’m glad Rob won it. He played the best game and deserved to win the money. This season would have been incredibly boring without him, and considering Matt’s astounding lack of strategy I didn’t think he deserved the money. Stupidity should not be rewarded.

The reunion show ended on a bit of an off note. David publicly proposed to his girlfriend, who apparently was on Survivor: Tocantins once upon a time. I had no idea who she was – I looked her up, and it turns out she was first to be voted out. So there you go. The proposal was incredibly awkward as she tried to joke “Survivor loves to blindside me” before she even said yes, and then made the same joke again afterward, presumably because it didn’t get any laughs the first time around. I cringed with embarrassment on their behalf.

I’m also not thrilled with the news about next season. Not only will Redemption Island be returning, which I think is a mistake, but two veteran players will be returning, which I think is an even BIGGER mistake. Rob vs. Russell is one thing, since their feud during Heroes vs. Villains had been pretty epic. But their rivalry in this season never really brought the drama it should have, and I don’t see it happening with any other players either. Any guesses on who it could be? (But NO SPOILERS, please!) If it’s Rusell again, I’ll have a fit. Could it be Coach and Phillip in a competition for who’s craziest? Or Parvati and Amanda? That wouldn’t even be a fair fight at this point. I’ll reserve judgment until the season begins, but I can’t say I love this news.

Before we close out, let’s talk appearances. Rob put all the weight back on. Phillip actually looked good. Natalie, Ashley and Andrea all looked stunning. Grant is an attractive guy and looked good with his new haircut, but what was that outfit? Did he just come from a gig as an extra on Big Love? In other haircut news, Matt looked good, but good like a really pretty nine year-old boy. Ralph looked like ZZ Top’s ginger cousin, and everyone else looked like they didn’t make a big enough impact on the season to deserve any screen time.

And if you’ll allow me a moment to get a little sappy, I’d like to say thanks to everyone for reading this season – it’s been a blast to write about the show and talk strategy with y’all. I’ll have a few more posts up throughout the day, and I’ll see you for Survivor: South Pacific!