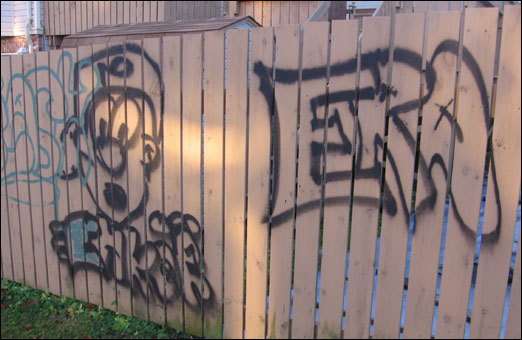 I woke up Monday morning and headed out to walk my dog.

We live on Oceanview Drive in Papermill subdivision.

Graffiti in the neighbourhood has been an ongoing problem, along with other forms of vandalism, since the summer.

But this morning the graffiti seemed to have gotten out of hand.

The signature “ERA” is plastered in bubble letters, otherwise known as “throw-ups”, all over mailboxes, Aliant  boxes, fences and sheds.

“Before anyone does anything please make sure people are reporting graffiti on HRM assets to the 490-4000 line so staff can remove it. Also, the call centre will take calls for graffiti reporting on our partner assets-Canada Post, Aliant, NSP and School Board. They will also remove graffiti. Anything outside of that may be private property and would need permission of the property owner,” states Nauss.

So I called the above number and reported the vandalism. A file has now been opened in my name.

I was told that the residents of the area cannot take matters into their own hands.

The Bedford Beacon had plans to organize a group of neighbours and hand out paint to cover up and remove the graffiti.

I was told that Canada Post is responsible for removing the damage done to mailboxes, and it is up to Aliant to deal with their power boxes. The same applies to Halifax Regional School Board and Nova Scotia power equipment.

In other words, residents cannot repaint a white fence white because it would be considered in itself a form of graffiti. Even with our best intentions, our hands are tied.

The Bedford Beacon, with our always very helpful councillor Tim Outhit, is in the process of organizing a neighbourhood Christmas social with a purpose-greet, eat and discuss a homeowners association.

Everyone in the neighbourhood is encouraged to attend this meeting.
Date, time and location will follow shortly.

The HRM website states that “graffiti is an act of vandalism that places a significant burden on the Municipality’s budget. Graffiti may also cause local property values to decrease and can result in a heightened fear of crime in the community.”