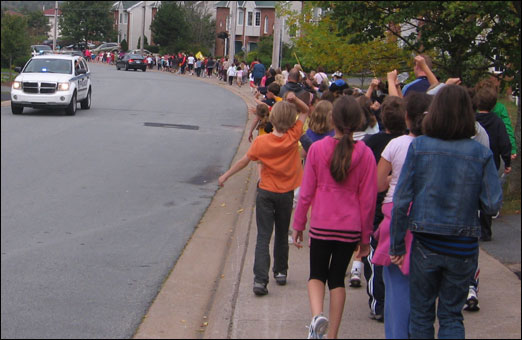 Throughout September schools throughout Bedford participated in the Terry Fox run/walk. On Wednesday, Bedford South School students showed their support and enthusiasm for the fight against cancer.

The following editorial was written by Benny Holmes, editor of the Bedford Beacon. Benny lost her father to lung cancer in May 2008.

On Wednesday morning I headed to my children’s school to participate in the walk in memory of Terry Fox.

Students, teachers and parents filed into the gym. Ms Madden, one of Bedford South School’s gym teachers, thanked everyone present for their contribution to the fight with cancer.

The energy in the room was high, as everyone got pumped to head outside to do their part.

Goosebumps covered my arms and I felt a knot in my throat as Ms Madden talked about Terry Fox’s battle with cancer. We’ve all heard his story many times, and yet each time we hear his name, we can only think that he died too young.

I know only too well the struggles associated with such a harsh disease. My father died of lung cancer in May 2008. My father (and his family and friends) fought against this unforgiving disease until the end.

Until the end, he never mentally gave in to the disease. He never complained, never showed any signs of bitterness. There was always a smile for us when we walked into his room.

Terry Fox and my father made the world a better place.

We can only hope that, when our time comes to go, we will leave with such courage.

By example they showed us how to live, right to the end.

It is for my father and Terry Fox, and other extraordinary people like them, that we continue to fight against this relentless enemy.