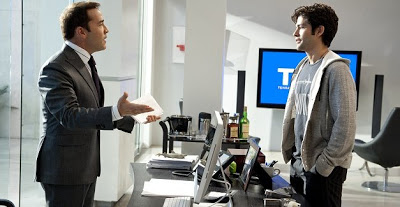 Wow. Well, that was different.

Entourage was back on Sunday night with the third episode in an eight-episode final season, and things took a turn for the serious. Honestly, I’m not quite sure what to make of all this. Entourage has had some major ups and downs over the years. It used to be a funny, crazy show that I enjoyed watching. Then it started to get formulaic and dull. Last season sucked, and the first couple episodes of this season weren’t exactly anything to write home about either. But at least with this third episode, “One Shot Fired”, we’re getting somewhere – even if that somewhere isn’t exactly what Entourage has been known for in the past.

Both Drama and Turtle are facing professional issues that could play out to be good storylines. Andrew Dice Clay demanded more money for Johnny’s Bananas, and ended up getting canned. Rightly so! The guy’s an ass. Unfortunately, he was also right for the show, and his replacement sucks. My guess is that Drama and Co. somehow find a way to get Dice back on the show. After all, this is still Entourage – things usually work out.

Meanwhile, I think this episode was the first time I actually cared about Turtle and his tequila business. He found out that Alex had dumped him from the owner of Avion, and that he was out of the business – they were selling to a bigger company, and there was no need for Turtle. It would make him rich, and that’s good, but the entrepreneurial sense that Turtle’s been developing over the past couple seasons is finally coming to full fruition. Instead of just sitting back and watching his stocks grow, he’s selling his shares and using the money to start a new business. I could actually get on board with this storyline for Turtle.

Meanwhile, Vince got mixed up with a producer who screwed him over back in the days of “Danger Beach”. They met at Narcotics Anonymous and agreed to talk about Vince’s stupid TV movie, and I really had no interest in the story until we learned the producer was still an addict. Vince did his best to help, and it reminded me of a side of Vince that I always liked. Yeah, he was a big star and also a bit vapid – but he was always a really good guy, and that’s what made you root for him on the show. I didn’t expect the dark turn the show took, but I think it could be good. As Vince tried to convince the coke-snorting producer to come out of the bathroom, he shot himself. I want to see how this plays out – will we see it in the tabloids? How will Vince react?

The best story arc this season continues to be Ari’s. Nothing was sadder than watching him try and entertain a hot twenty-something Lloyd had set him up with. He’s not the same guy he was last time he was playing the field – she didn’t realize he’d be taking her for dinner, she didn’t understand any of his jokes, he forgot to carry a condom, she had a scary roommate. He ended up in the arms of Dana Gordon, which I thought was a great development. I thought I wanted Ari back with his wife, but now I want to see how this plays out.

Luckily, there were actually a few funny moments in the episode as well. I loved the scene in Dice’s apartment, and as I said, the stuff with Ari dating was great.

What did you think of the episode? Were you surprised to see a suicide thrown in there? This certainly isn’t the Entourage of season two – I mean, when was the last time we saw someone’s breasts? Sound off in the comments!