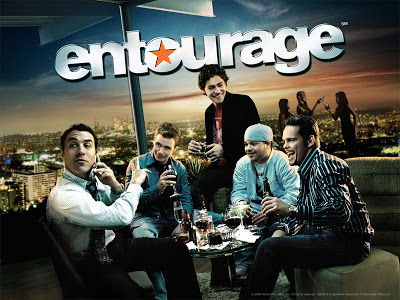 This season of Entourage is getting off to a slow start rather than revitalizing the series after a weak sixth season. Sunday night’s episode “Dramedy” was funny in parts, but also kind of boring. The worst part is that the most boring aspects of the show revolve around the star, Vince.

Seriously – Vince bought a motorcycle and a dinosaur skull? Lame. I don’t like the “Vince is a born-again bad boy” plot line, but if they’re going to do it they should be doing it well. Sure, motorcycles are dangerous. But they’re also driven by Brad Pitt and George Clooney, two guys who don’t exactly scream “reckless” to me. And buying an expensive dinosaur skull because Nic Cage has one? Who aspires to be like Nicholas Cage? Vince is a fictional movie star and I still like his movies better than Cage’s. Sure, the rivalry between E and Scotty could become kind of interesting, but so far it’s been more like two schoolgirls bickering over who gets to give a puppy a treat.

The real fun this episode was Drama’s continuing quest for a television show. Lloyd (I need more Lloyd!) brought in a washed up Emmy-winning writer who’d come out of retirement and thought Drama should do comedy. I love anything that plays off Drama’s ego, and the comedy show really did. Drama doesn’t think he’s funny, and to be funny he has to be playing it straight. Basically, people laugh at him and not with him. And Drama also considers himself better looking than John Stamos. This is at once completely ridiculous and totally believable. Of course Drama thinks he’s better looking than Stamos. And of course, he isn’t. I really want to see the two of them working together, and I really want to see how Drama deals with being laughed at.

Turtle also faced some pretty boring struggles this week with his chauffeuring business. Apparently it’s losing money like there’s no tomorrow. I kind of hate when frivolous shows and movies try to pretend that they’re in tune with the rest of society by acknowledging that there’s a recession. It’s not fun, and it’s not smart. Vince already went broke once – I don’t need to see Turtle pretend that times are tough now that Vince is back to dropping thousands of dollars on ridiculous items.

Turtle’s former employee Alex is back in the picture with a sketchy business deal that will take the duo to Mexico. Apparently it’s not drugs, so I’m interested to see what Turtle will get into in Mexico. If he starts smuggling people into the country, I’ll declare that Entourage has officially jumped the shark.

What did you think of “Dramedy”? Is this season holding your interest?