It’s not what it sounds like. (Which is what? It reminds me of “slurping”) It’s “Live Action Role Playing” and it was the focus of Monday night’s episode of Huge, a new ABC Family show that I’ve become addicted to. 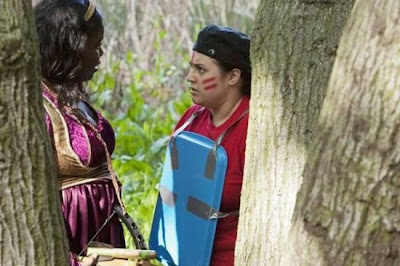 This week’s episode of Huge focused a lot on two of the shyer, quieter campers – Becca and Alistair. I love Becca. She’s such a sweet character, and I love how her shy, almost silent nature plays against main character Will’s boisterous and opinionated personality. It turns out Becca was big into role playing and had created her own larping game based on a universe she’d imagined. Will helped her drum up some participants, but in doing so she altered the rules of the game and hurt Becca’s feelings. I liked watching Becca come into her own while involved in the role playing game, and you could practically see her self esteem grow after she found out that other kids at camp had actually enjoyed playing. If I had a kid, I would want him/her to watch this show.

Another interesting storyline revolved around Alistair and Ian. The other guys in their cabin asked Ian to tell Alistair that he smelled – like, literally smelled bad – because Ian and Alistair were friends. It’s a tough thing to tell someone, and Alistair wasn’t making it easy. He was too busy pretending to be a cat for the larping game. Alistair is definitely a weird kid, but in an adorable, lovable kind of way. Eventually Ian went to his camp counselor for help, and he figured out that Alistair wasn’t showering because he was embarrassed to do it in front of all the other guys. Poor Alistair!

There was also some drama involving a neighboring tennis camp. Dr. Rand clearly has some kind of history with the tennis camp’s director, and Amber got a taste of her own medicine when she was accepted by the cool tennis kids as one of their own and then witnessed them making cruel jokes about the other fat campers. Amber’s by no means a villain on the show, but the storyline showed that even laughing at mean jokes can lead to hurt feelings.

This third episode wasn’t as strong as the first two, but I’m still a fan of the show. I especially recommend it for anyone with kids – It has some good messages about body issues and fitting in, but the writing an acting are also good, and the show is funny enough that you can watch it with them.

Huge: Who wants to do some larping?
https://haligonia.ca/huge-who-wants-to-do-some-larping-20864/