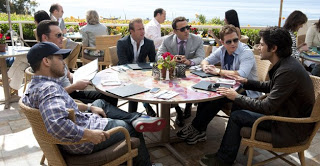 Airing on the heels of the sad news of Amy Winehouse’s death, I felt a little uncomfortable watching Vince Chase leave rehab with such a cavalier attitude on the season premiere of Entourage. But this is a fictional show and Vince’s problems weren’t even close to the destructive spiral the world witnessed with Amy, so I tried to let it go and enjoy the episode.

Three months (or more) have passed since we last saw Vince and the boys, and he’s just getting out of rehab. A lot has changed – Johnny Drama is on his way to having a hit animated comedy, Turtle is looking lean and is experiencing success with his tequila company, and E…well, E isn’t doing so well. His engagement with Sloan is over, his friendship with Vince is on the rocks, and he’s dressing like a slob for work. Seriously – I’m supposed to believe he and Scott have taken over the agency, but he’s wearing a Yankees T-shirt to work? Come on.

Overall, I thought the episode was OK – but not great. I loved the stuff with Drama walking on eggshells around Vince, trying to make sure that his baby bro doesn’t relapse. I loved watching Ari try to fight for his marriage, only to be crushed when Mrs. Ari tells him she’s been seeing other people. I even thought the tension between Vince and Eric was good. But if Entourage wants to go out with a bang, they need to do better.

I’m still not convinced that this Turtle tequila storyline is worth my time, and they need to find a way to make E likable again. I’m excited to see where this Johnny Bananas/Andrew Dice Clay storyline goes, though – Drama won’t like being outshone by the second banana. I’m also looking forward to seeing all four of our guys under one roof again (although it’ll be a new roof, since Turtle burned down the house at the end of the episode) and I hope that will help the show regain some of what made it so good in the earlier seasons.

Did you catch Entourage on Sunday? What did you think? Also, y’all should go check out You Know You Love Fashion – I’ll have a fun blog post talking first episode fashions up there on Wednesday.