Last summer, my youngest daughter started watching Full House episodes on Netflix. She was hooked! She loved the corny humour and family atmosphere that the show offered. When we heard the rumours about a Fuller House reunion, she was over the moon. Fast forward to the announcement that 12 episodes of Fuller House would be available for viewing on February 26th, 2016, and her excitement grew.

You can only imagine how she felt when I told her that we would get to preview the first six episodes on her 10th birthday, more than a week before the rest of the fans of the show.

Over a span of two evenings, we binge watched Fuller House and the verdict? It was a hit. If you loved the corny episodes of old, then you’ll laugh and cry with the cast of Fuller House. 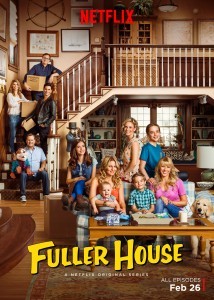 Tomorrow all 12 episodes will be released on Netflix… I guess I know what we’ll be doing tomorrow night!

Everything Old Is New Again – Fuller House On Netflix
https://haligonia.ca/everything-old-is-new-again-fuller-house-on-netflix-132961/