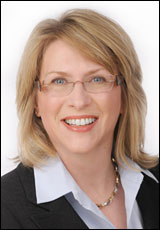 In an exclusive inteview with the Bedford Beacon, Liberal candidate Kelly Regan answered some questions about her campaign and personal life.

Why are you running for office? Why did you decide to get into politics?

To me, running is all about giving back to the community-it’s an extension of what I’ve been doing in various volunteer positions over the years. Volunteers here in Bedford-Birch Cove do so many great things-but really, what we are trying to do is build a stronger community. I think the best politicians try to make their community the best it can be.

About a year ago, I was approached by some people in the riding, who thought I’d make a good candidate. And then Liberal Leader Stephen McNeil inspired me with his calm, steady leadership.

The tipping point for me was a talk that the minister at my church gave in the fall. He talked about the 2000 US election, and how some people had not been good stewards of the resource they had been given-their vote.

I knew then that I wanted to be a good steward of the resources we have here in Bedford-Birch Cove and in Nova Scotia.

When did you decide you wanted to get into politics?

I suppose I always had it in the back of my mind. But for me, that talk about stewardship, coupled with a continuing concern that this riding deserves better facilities and services, provided the incentive. Support from my family sealed the deal.

As our community continues to grow, we’re going to require the facilities-the schools, the recreation facilities, the mass transit-to make life here attractive, without losing the special charm of our area. And we want to make sure those new residents feel welcomed, and are encouraged to contribute in our community life.

How do you plan on campaigning?

I’m not interested in being negative; I respect both the other candidates in the race.

That said, I do think it’s fair to point out the policies and procedures that haven’t worked for Bedford-Birch Cove. I believe we can do better when we co-operate, when we find common ground, and there hasn’t been enough of that lately.

How do you plan on beating Len Goucher?

This election isn’t about “beating” anyone; it’s about serving the constituents of Bedford-Birch Cove. It’s about offering them an alternative to Rodney MacDonald’s government.

Have you done any polling in the riding? Of so, do you have any data on current levels of support?

No, I haven’t. But I’ve been knocking on doors since early April, and I’m hearing two things: people want a change and they like our policies and our commitment to building a better Nova Scotia.

What is the most important issue(s) to the residents in your riding?

I will work to deliver the the facilities-schools, libraries, transportation, recreation-that we deserve. And I will consult and communicate with residents in doing so.

What have you learned from your husband about politics?

I’m lucky to have watched and learned as Geoff has progressed in his career.

I’ve learned from Geoff that earning and keeping the trust of constituents is the most important thing in the world. And this can only be accomplished when you remember that you are there to serve constituents, not the reverse.

What has Goucher failed to do adequately for the riding?

As I indicated previously, I’m not going to get personal. So why don’t I talk about what I will do?

I’m interested in being open and accountable, and working with other levels of government, to solve our problems. Residents tell me every day about long waits for health care, their frustration with the traffic on Bedford Highway, the lack of public transit, high taxes for small businesses.

Rodney MacDonald’s government has simply not done enough to serve the people of this province. You can’t possibly do a good job when you only sit for 32 days a year.

You’re not being a good steward of the province’s resources when you pretend there’s not a recession under way. We are the last province in the country to bring in a budget; that’s simply not responsible. We knew last October that we were in a recession-economist after economist told us so. This government used the “ostrich defence” against the recession-it stuck its head in the sand. That’s simply not a responsible way to govern.

If elected, how do you plan on being involved with the people of Bedford-Birch Cove on a day to day basis?

Well, of course, I live here, volunteer here, and raise my children here, so people already raise issues with me all the time. My constituency office will be centrally located and I will have an open-door policy.

My background is in communications, so that will be a cornerstone of my work. I’ll hold community clinics, so I can meet residents in their own communities. It’s a page from Geoff’s playbook, but I believe it’s the right thing to do. It’s been a long time since we had a citizen-MLA public meeting.

And of course, I’ll be available through e-mail, website and by phone.

What is your favourite song/movie/holiday destination?

My favourite song? I played in bands (not rock-I’m not cool enough for a rock band)for years, so I have a lot of favourite pieces of music. For pop music, I love anything by the Beatles. Ditto the Stones’ “(Can’t Get No)Satisfaction.” In classical music, I’m moved by Samuel Barber’s “Adagio for Strings”-that’s the theme music for the movie “Platoon”, and it was played at John F. Kennedy’s funeral.

Favourite movie?
Dramas: “Gandhi” and “To Kill A Mockingbird”. I recently re-watched these movies, this time with our 12 year-old son. Both films underline the importance of being true to your beliefs, of doing the right thing.

Comedy: “Monty Python and the Holy Grail”. I did a paper on it in university, so I had to watch it about 50 times. Geoff says he knew he’d found the right woman when he discovered I could quote from the movie at length.

Holiday destination:
To me, reading a book is like a holiday. Giving you the title of my favourite book is pretty much impossible. I love Joseph Heller’s “Catch-22″-it’s so absurd, yet so true. I love Jane Austen’s “Persuasion”. I’m a huge fan of Alistair MacLeod-I wish I’d written “No Great Mischief”-and the work of Alice Munro and Margaret Atwood-I just read her book on debt. And pretty much anything by Malcolm Gladwell-”The Tipping Point”, “Blink” and now “Outliers.” Plus Dan Hill’s “The Book of Negroes”-I finished it just before the campaign started and I just couldn’t put it down.

Who is your inspiration?

My grandparents were immigrants from Ukraine, so I identify with their strong work ethic. My grandmother was a strong independent woman, who picked herself up after the end of her marriage and left the farm. At first she managed a diner. I remember her teaching herself to type on an old manual Olivetti; she went on to became an executive assistant-all with only two years of school.

And my children are motivational as well. I often ask myself when making big decisions: is this a quick fix? Is this the right thing to do for now, for five years from now, for twenty years from now?

And of course, I get inspiration from the people I meet each day. The other day, I met a man who was having a refit done of his office building-he was getting new lighting put in. He asked Nova Scotia Power what they were doing with the hundreds of old lighting tubes-how they were recycling them. It turned out they weren’t. So he started a company to do just that-and soon, they’ll be recycled right here in Nova Scotia. I think that kind of vision, that kind of gumption, is extremely inspirational.