I tuned into Mark Burnett’s new Amazing Race rip-off reality show Expedition Impossible last night, and I was pleasantly surprised. I hadn’t read the best advanced reviews of the series, but it was engaging and exciting enough to at least bring me back for the next few episodes, and likely the whole season. I mean, it’s summer – what else am I going to be watching?

Expedition Impossible tracks 13 teams of three as they trek across Morocco, completing treacherous tasks. So yes, it is almost exactly like The Amazing Race, but with less travel, more people, and lower stakes. But I’ll take it.

The thirteen teams self-identify as various stereotypes, which is also somewhat jacked from The Amazing Race. The host gathered the teams together, said a bunch of stuff about cooperation, and told them to look at their teammates. RUDE! One can’t, he’s blind. Be sensitive, reality TV show host. (Kidding!) Really, though, I think it’s pretty awesome that one member of a team is blind. So, let’s talk about the teams.

“California Girls” is a group we didn’t see much of in last night’s episode, but they seem to be pretty middle of the pack so far.
“The Cops” were not representing the police force well – they’re definitely back of the pack material.
“The Country Boys” are already one of my least favorite teams, since they started out cocky and one teammate was puking and ready to quite about ten minutes into the show.
“Fab 3” is an early favorite for me. A pair of ex-boyfriends and one’s sister who confused everyone with their knee socks, they made a pretty strong showing in the first episode.
“The Fisherman”didn’t leave much of an impression during the first episode.
“The Football Players” placed well, but I’m going to grow tired of their “this is nothing like a football arena!” comments pretty quickly.
“Grandpa’s Warriors” consists of a 69 year-old grandfather, his son, and his granddaughter. I’ll go ahead and give them a hearty “Nice try!” right now, because this show seems to be even more difficult for the elderly than The Amazing Race.
“The Gypsies” really should have been called “Team Movember”, because at least two of the three guys were rocking curious mustaches. I think I’m going to like these guys.
“Latin Persuasion” is a group of girlfriends from New York who are loud, not very athletic-looking, and were dressed…inappropriately for the desert. Or as one guy said “They look like a dance group.” Or, as his teammate said, “A damn ugly dance group.” RUDE.
“Mom’s Army” is another team where age will likely get in the way. The titular “mom” is 52 years-old, and simply can’t compete on the same level as some of the other teams.
“New York Fireman” are three men who will not be making the 2012 firemen calendar. Don’t these guys have to pass some kind of physical exam? One moaned that “I kinda wish I worked out a little more.” Yeah, you and me both, buddy – for the safety of the people of New York!
“No Limits” is the group with one blind teammate, and I rather enjoyed his sense of humor. “Nobody wants to lose to a blind guy,” he cracked. “How humiliating would that be!”
“Team Kansas” is a group of sisters from – you guessed it! – Kansas. They didn’t leave much of an impression, but they placed pretty well so they could be a team to watch. 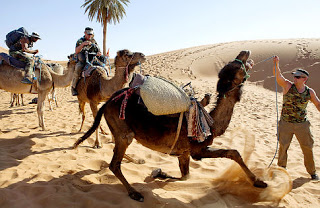 To kick off the first leg, or whatever they call it on not The Amazing Race, the teams had to hike up a huge mountain of sand in the desert, then all the way back down the other side to get camels. A lot of the teams immediately struggled with this, despite thinking they’d be able to do it. One of the country boys practically passed out halfway up, allowing the clearly weakest team Latin Persuasion to pass them. I mean, one of those girls said “If we can make it in New York, we can definitely make it out here in the Sahara.” Um, no. You can’t. I’ve been to New York – there is literally food being sold every five feet. You can buy anything there. Water is readily available. There are millions of air conditioned buildings. It has in no way prepped you for the Sahara.

Not only was Latin Persuation ill-prepared, but they bickered the whole time too. One girl in particular was bad. “She doesn’t work well with others,” one said. Oh, awesome! What a great quality to have in a teammate! 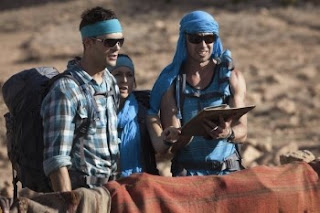 After completing a journey on a camel, teams had to “find water the local way”. I’ll admit, I would have had no idea what to do here. The Fab 3 had the idea to dig in the sand for water, which I thought was smart until other teams said it was stupid. I’m easily influenced and began to second guess them. Fab 3 was right, though, and after digging enough they found water. Their only mistake? I would have covered the hole in after everyone who’d helped dig had filled their canteens. All the other teams not only benefited from their stroke of genius, but from their hard work too.

Next, teams abandoned their now-watered camels and trekked across a difficult mountain range. Seriously, can we all just take a moment to be impressed that the blind guy is a mountain climber? Awesome! After the climb, everyone had to rappel 300 feet down the other side of the mountain. Especially in the scorching heat, it was a physically exhausting task.

For the final task, teams had to count how many snakes were used during a snake charming performance. The correct answer was 11 – the charmer had more snakes than teeth – and if teams answered correctly, they’d trek to the finish line. If they answered incorrectly, they’d be sent almost an hour out of the way. This happened to No Limits, and they went from being at the front of the pack to the middle.

The Gypsies checked in first, followed by the Fab 3 and the Football Players. Then Team Kansas, The Fisherman, No Limits, The Country Boys, The New York Firemen, California Girls, The Cops, and Mom’s Army arrived. Yes, the police officers arrived only briefly before a 52 year-old woman and her daughters. Feel safe?

That meant it was down to two very weak teams – Grandpa’s Warriors and Latin Persuasion. Both teams were struggling with the rough terrain on the way to the pit stop final checkpoint. It was dark. Someone threw up. In fact, I think there was more puking in this episode than I’ve seen in any other reality TV show. I was surprised when Grandpa’s Warriors arrived before Latin persuasion, but I wasn’t sad about the result. Sure, Grandpa’s Warriors won’t last long. But the New York girls were too prissy and too argumentative for a show this difficult, so I’m glad they’re gone.

Did you catch the show? Will you keep watching?