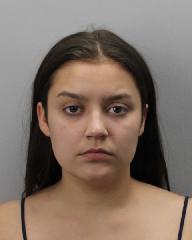 Halifax District RCMP has obtained a warrant for the arrest of a woman charged with several offences in Lower Sackville.

Shannon Rene Doy, 20, of Fall River, is charged with the following:

The charges are in relation to an investigation into stolen property from December 2019 that resulted in Doy being charged. Efforts were made to locate Doy but she was not found and an application was made to have a warrant issued for her arrest. On February 13, a public interest warrant was issued by Dartmouth Provincial Court and police are requesting assistance from the public to locate her.

Doy is described as a 5-foot-4, 152 pound woman with black hair and brown eyes.

Anyone who sees Doy is asked to refrain from approaching her and to call police. Anyone with information on her whereabouts is asked to contact Halifax District RCMP at 902-490-5020. Should you wish to remain anonymous, call Nova Scotia Crime Stoppers toll free at 1-800-222-TIPS (8477), submit a secure web tip at www.crimestoppers.ns.ca, or use the P3 Tips App.