L-A: Yeah, we’re late posting today. Ally is once again sick and I didn’t get home until really late last night. Usually, I just stay up late and power through a post – but I was like five different kinds of tired. So, late post. Here are the favourites:

It’s back! Yes! We’re excited, because this time it’s a challenge (and you know we love a challenge).  The challenge is to try something new downtown. Which at first stumped me…but then I remembered: I’ve never gotten a tattoo before! So I’m doing it! I’m getting a tattoo! Now I just have to decide: ampersand or anchor?

I’m gonna crowd source this one (but reserve the right to ignore the vote because this is kind of permanent):

I’ll eventually get both (to the chagrin of the husband…so we’re deciding on which I get first).

2. My favourite intern Glynn is a stylish lady

Glynn isn’t my intern. She’s an intern at the job. And she’s awesome. And adorable. And now she’s on You Look Fiiine.

She’s going to go back to school soon, which sucks. Becuase who else will send me videos like this during the week:

Even Ally agreed it was a super crappy video. Actually, she didn’t just call it crappy. This is what her reply was when I sent the video to her on Wednesday:

Secondly, that is the worst video. The worst. Like, I’d listen to Rebecca Black over that. THE WORST.

Whenever I find a video Ally hates, I feel like I’ve achieved something. Not sure what that something is, but there you have it.

3. I am totally making plans to watch Season 1 of the O.C.

I think it needs to happen. What with Anthony’s post from our West Coast Bureau and now me trying to convince him there needs to be a Marissa Cooper themed tumblr… 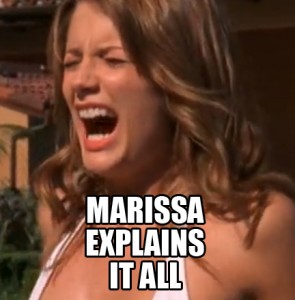 I think that tumblr needs to happen. Or I just need to watch the first few seasons of The O.C. Either way, it’ll be awesomesauce for me.

I think it’s gonna happen this fall. This will be all kinds of awesome.

Avec Soulja Boy and Andrew W.K. Ally will probably hate it, but that’s okay, because she is either on the road for work or on the couch with a flu, so I CAN POST WHATEVER VIDEO I WANT and she can’t say anything about it.

Thanks to Lauren for posting this on her twitter this morning because that song is totally my morning dance party.