Nothing says it’s Spring more than fiddleheads! These tightly furled shoots of the Ostrich Fern are named for their resemblance to the head of a fiddle (violin). This fern typically grows in moist, shady environments, which are commonplace in rural NS.

For folks around these parts, foraging for fiddleheads is engrained in the culture. As a come from away, it has taken me several years to uncover the local “secret” spots where they reside.

Fiddleheads are growing in popularity and attract many food enthusiasts. So what’s all the fuss about? Well, for one, like most wild edibles, fiddleheads pack a nutritional wallop, that boosts the immune system. They contain antioxidants, omega-3 and 6 essential fatty acids, are high in vitamin A and C, as well as carotenes and several minerals, such as potassium, iron and copper. (http://www.nutrition-and-you.com/fiddlehead-ferns.html)
They are one of my favourite forageables because they appear so early in the Spring (early May), that they beat out the blackflies and mosquitoes! What a joy it is to be out in the woods at this time of the year. 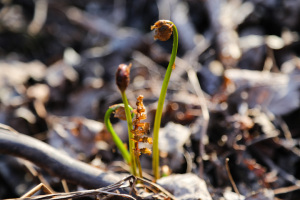 Wild plants are often found in abundance and they are free for the taking. Having the knowledge to properly identify edible plants growing in the wild, is a skill that is being lost by many cultures, as we become more and more disconnected from our food (and from nature) and have grown more dependent on imported and cultivated foods in our diets. Wild edibles are also more tolerant of drought and are more adaptable to climate change than cultivated crops. They represent a potential and important part of a robust diversity of food plants in our diets. For these and so many other reasons, they ought to be revered and protected.

A Note About Sustainable Harvesting

As with foraging for any wild edible, there are rules you must follow to ensure that the plants are not over-harvested and that nature is not disrespected. One should never pick all the fiddleheads from a patch, or it could kill the whole fern. To harvest fiddleheads sustainably, take only two or three from each patch and move on to the next. Do not harvest from nature reserves or parks and always seek permission of landowners. Remember you may not be the only person harvesting from a known patch and that over-harvesting can lead to extinction of a plant. Avoid buying fiddleheads from a grocery store unless you are certain they have been sustainably sourced. Another biggie: for your own safety, is to NEVER pick anything that you have not positively identified. It is always wise to carry a field guide with you. One helpful trick I learned from a recent wild edibles workshop, is that to distinguish fiddleheads from other ferns, look at the base of the fiddleheads – they should resemble the base of a celery stalk, otherwise, it’s the wrong fern.

For excellent guidelines on safe and ethical foraging see: http://www.ediblewildfood.com/foraging-for-food.aspx
Two great references for wild edibles: “Weeds, Guardians of the Soil” by Joseph Cocannouer and “Wild Plants of Eastern Canada” by Marilyn Walker 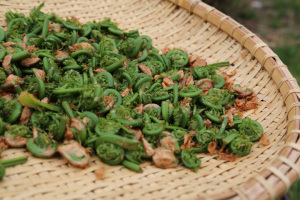 Fiddleheads are gaining so much attention, that there are growers looking to cultivate them. One such farm, located near Glenholme NS, is FiddleHop Farms. You can check them out at: https://www.facebook.com/FiddleHopFarms

Probably the biggest reason people brave the bugs and bears to seek out wild fiddleheads, is that they are so yummy. It is generally advised that you boil or steam them for at least 10 minutes, to kill any microbe the fern may harbor and to cook away any toxins some believe to be associated with ferns.

Fiddleheads are delicious sautéed with other wild delicacies of early spring such as morel mushrooms, or dandelion greens. A common way of serving them is sautéed in butter or olive oil, along with plenty of garlic.

A Blog, Poem and Recipe by Catherine Bussiere

by the river we find some tightly curled ferns
they’ve just started showing up through the leaves
you can’t wait too long
when nature wakes up she’s got no time to waste for stretches, coffee, and all
she’s on the move

this morning I made us a fiddle head omelet
for two people I used three large farm eggs
beat them up with a little cream, a pinch of salt, cumin and fresh ground pepper
I steamed a couple handful of fiddle heads
I grated some cheddar cheese and chopped some chives
I pour the egg mix onto a cast iron pan
when the egg mix starts to set I place chives, fiddle heads and cheese on one half of it 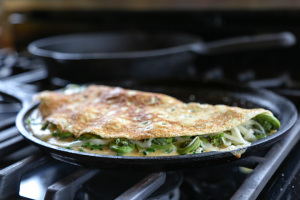 Blog excerpt and all photos courtesy of Catherine Bussiere.

Catherine Bussiere is a Canadian photographer and videographer based in Cumberland County, Nova Scotia. Through her lens we steal a glimpse into the everyday, and the surprise it holds. Catherine is currently working with the Cumberland Food Action Network (CFAN) to produce a video series on local Wild Edibles. http://www.catherinebussiere.com