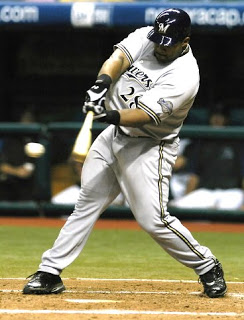 Haligonia Sport’s contributor Joel MacDougall thinks the Jays should plan to make a bid for Prince Fielder in 2012.

by Joel MacDougall
This year’s offseason has seen the Toronto Bluejays make some moves on the periphery. Trading away your opening day starter is never insignificant, but neither does it rank up there with the acquisitions of Crawford and Gonzalez in Boston or Cliff Lee spurrning the Yankees to join, quite arugably, one of the greatest rotations of all time in Philadelphia.

The Jays apparently showed considerable interest in the young Royals hurler Zack Grienke. The 27-year-old former Cy Young award winner would have immediately strenghtened the Jays starting rotation. More importantly though, Grienke could have provided top-end depth into the future. Ultimately the price in terms of prospects may have been to high.

Despite the fact that the Jays will be able to field a young team that showed promise last season and hopes to build on that, they are probably won’t be a serious playoff contender until 2012. General manager Alex Anthopolous, has expressed the opinion that the team is likely one big piece away, and I believe that piece could be found next off-season.

Since taking over the club last offseason, Anthopolous has made it a priority to build the team from the farm system up. Gone are the days of the quick fix, and signing high-priced, veteran free agents to try and compete despite young depth. Now the theory is to build a solid team through the draft and acquiring young, controllable players. As the core develops, money can be spent on free agents if it is beleived to push the already solid young core over the top.

So far, the plan seems to be moving along smoothly. Anthopolous has made some shrewd moves to turn organizational weaknesses into strengths. It all began with the Halladay deal, which saw the Jays acquire high-end prospects SP Kyle Drabek, C Travis D’Arnaud, and 1B Brett Wallace. Wallace was later shipped to Houston for OF Anthony Gose, whom the Astros had acquired from the Phillies and the Jays had apparently coveted in the Halladay deal.

The future at shortstop in Toronto had been in question for years, but was addressed by Anthopolous’ aggressive pursuit of Cuban prospect, Adeiny Hechavarria. The Jays were able to sign the standout Cuban depsite competing against the Evil Empire of the New York Yankees. They also came close, but were ultimately outbid by the Reds on Cuban pitching sensation Aroldis Chapman.

A less earth-shaking signing on a short-term solution at shortstop, has since provided further promise at the position. Alex Gonzalez was signed last offseason to provide solid defense and the occassional base hit, until a longer-term solution like Hechavarria was ready down the road. But after a great start to the year Gonzalez became something of a hot commodity for playoff contenders looking for an upgrade. Gonzalez was sent, along with a couple minor league pitchers, to Atlanta for Yunel Escobar, who had been underperforming, but seemed to find new life as a Blue Jay.

The Jays biggest strength right now is a talented, young pitching staff. The 2011 opening day rotation has the first four spots penciled in as Ricky Romero, Brandon Morrow, Brett Cecil, and likely the aforemention Kyle Drabek is ready to make the jump. Morrow was acquired from the Mariniers in another smart move by Anthopolous. Despite amazing stuff Morrow was never given a consistent role in Seattle, but once he took the hill every fifth day in Toronto, his promise quickly became reality.

This strength allowed the Jays to move Shaun Marcum, the veteran of a young staff, for another top prospect, Brett Lawrie, who could help fill an infield position or be moved to the outfield. He most recently played secondbase in the Brewers system. Though some question his defensive ability to remain in the infield, he could move to fill the Jays hole at third, or facilitate Aaron Hill moving there.

So looking ahead, where do the Blue Jays major holes lie? The pitching staff is young, but very talented and not far from reaching full potential. Pacific Coast League MVP, J.P. Arencibia looks ready for consistent playing time in the bigs mentored by Jose Molina. Escobar and Hill form a solid middle infield, with good offensive ability provided Hill regains his form. The outfield will be manned by Vernon Wells and Travis Snider and possibly Homerun champ Jose Bautista and DH Adam Lind. Bautista could see time at thirdbase depending on where the greater need exists and Lind is going to be given a chance to fill the void at firstbase. These temporary solutions are indications of where the holes are: the corner infield.

This year will be preparation though. Romero will offically take the role of ace. Morrow will see if the leaps he made last year continue with a consistent role. Escobar and Hill will have a full year together in the field and need to produce with the bat as well. Snider has another year of experience and could be that much closer to realizing his full potential. Ultimately, I think the Jays will fall just shy of the postseason to the Redsox and Yankees, despite a competitive year with a lot of positives.

What is one the one piece that they could acquire next offseason to push them over the top?

A free agent after this year, it would be a miracle if the Scott Boras client didn’t test the free agent waters. He will certainly garner interest and the money will be high. But there is one thing that might help keep the salary within the Jays range; AL East divisional rivals, and perennial big-money free agent spenders Boston and New York have already locked up high-priced first basemen, and will not likely be involved.

Anthopolous has said that ownership is willing to spend, but it is a matter of getting the team to a point where it is worthwhile to do so. With no real blue-chip prospects for the position in the minors, it would make sense that if they were going to spend on any position (other than pitching) it would be first base.

Of course, Albert Pujols is also a free agent, but if he isn’t re-signed by St. Louis I will be shocked and I doubt that Toronto would be able to land him. I actually refuse to even consider the option as I feel it will only lead to disappointment.

Fielder of Dreams Could Be Reality for Jays
https://haligonia.ca/fielder-of-dreams-could-be-reality-for-jays-30637/