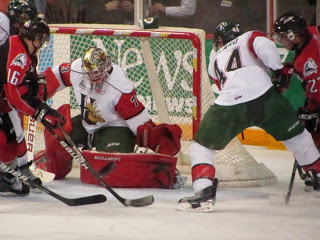 by Joel MacDougall
Goaltender Anthony Terenzio and forwards Brandon Hynes and Jean-Gabriel Pageau were named today the TELUS three stars of the week for the period extending from December 13 to 19.

Anthony Terenzio is the first star of the week. The Halifax Moosehead’s backstop collected three wins in three games with stellar performances in Moncton and in Acadie-Bathurst. He also earned another win at home versus the Titan on Saturday. He finished the week with a 0.86 goals-against-average and .971 save percentage by stopping 68 of the 70 shots he faced. Terenzio earned a star in the two games that he started.

Terenzio, a sixth round pick in this year’s QMJHL draft, came into the year as the back-up to the incumbent, Mathieu Corbeil (4th Rd Columbus, 2010). After some early season struggles by Corbeil, as well some heath issues, Terenzio has been getting a few more opportunities to play. His numbers have improved since the start of the year, culminating in the a hot week in December.

It would certainly not hurt the Mooseheads to have a bit of goaltender controversy, provided it is prompted by the stellar play of Terenzio. One goalie pushing the other can help win games.

Victoriaville Tigers right-winger Brandon Hynes is the second star of the week. The forward registered 4 goals and 3 helpers for a total of 7 points while posting an exceptional +7 rating in two wins against the Huskies and the Foreurs. He was also named the second star of the game last Saturday in Rouyn-Noranda.

Finally, Gatineau Olympiques forward Jean-Gabriel Pageau is the third star following a stretch in which the Olympiques collected an impressive three wins. He recorded 4 goals and 4 assists for a total of 8 points. Pageau also managed to maintain a +6 rating. Last week, he won the Olympiques’ mid-season offensive player award.