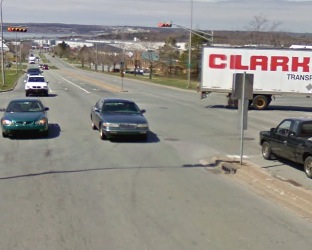 At approximately 630 pm,  Halifax Regional Police and the Integrated General Investigation Section conducted a traffic stop at the intersection of Akerley Boulevard and Joseph Zatzman Drive in Burnside.  The traffic stop lead to a search of the vehicle located inside hidden in the back seat was a loaded handgun. The male driver was arrested without incident.

A 36 year old Cole Harbour man is being held for Provincial Court in Dartmouth to face weapons related charges.

At approximately 7 pm Halifax Regional Police conducted a criminal code search warrant at a residence located on Shamrock Drive in Dartmouth. Located inside the residence were four long barrel guns, one had a bayonet attached, and one handgun.  All the firearms  Also seized were a quantity of ammunition and an amount of marihuana. The male suspect was arrested without incident.

A 24 year old Dartmouth man is being held for Provincial Court in Dartmouth to face weapon related and drug charges.