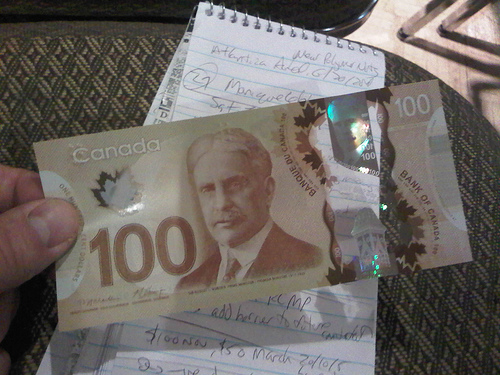 Try to rip it in half and you're more likely to pull a muscle instead. Canada has a new $100 dollar bill and it made it's debut yesterday at the Bank of Canada. Global Maritimes is reporting that the new polymer plastic bill is waterproof and, more importantly extremely difficult to counterfeit.

With enhanced security features that include a clear reflective window with distinctive watermarks the new currency is similar to polymer bills that have been used in Australia for years now. The article states that the release of the polymer $50 dollar bill will follow suit in March 2012, with all other denominations entering into circulation by 2013.

Some Canadians are wary about the new currency, but we want to know what you think Haligonia? Are you ready to carry around more plastic in your wallet?