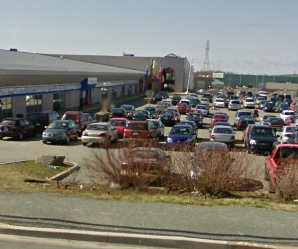 From HRPD:
Four people face charges in connection with an incident which took place Wednesday evening.

A 24-year-old Fall River man and a 26-year-old Halifax man face charges of kidnapping, assault with a weapon and threats. The 24-year-old man faces an additional charge of breaching his conditions. They are scheduled to appear in Dartmouth Provincial Court this afternoon.

At 8:20 p.m. police responded to an assault in Highfield Park. Upon arrival, one of the three male suspects fled across Highway 111 into Burnside where he was apprehended by a member of the East Quick Response Unit after a foot pursuit. The two other suspects fled the area. The male victim was transported to hospital for treatment of non-life threatening injuries.

During the subsequent investigation by the HRP/RCMP Integrated General Investigation Section, officers learned the victim was initially picked up by one of the suspects in Dartmouth and driven to Spryfield where the driver obtained a gun. A female was then picked up and took over driving. The victim was held at gunpoint while the man attempted to obtain information from him. The victim was able to escape after the vehicle was involved in a collision in Highfield Park.

A few hours later, the victim attended a Highfield Park apartment where three men subsequently  assaulted him. The victim was taken outside where his life was life threatened. He was able to get away but was caught by the three men and further assaulted. Police were called at this point.

Twenty-seven-year-old James Bernard Melvin of Fall River was arrested Wednesday night and Natalie Catherine Digioacchino, 28, of Harrietsfield, was arrested yesterday morning. Melvin faces charges of kidnapping, extortion, assault with a weapon, threats, a number of weapon related charges and breach of conditions. Digioacchino faces charges of kidnapping and extortion. The were both remanded to appear in Dartmouth Provincial Court today. Melvin also faces additional charges of uttering threats, breach of recognizance and three counts of assault police after an incident with officers while in custody.

The two other suspects turned themselves in last night at 11:40 p.m at Police Headquarters. No determination on charges has been made and the investigation is continuing.