Home / Uncategorised / FPQT goes to the Movies: Sex and the City 2 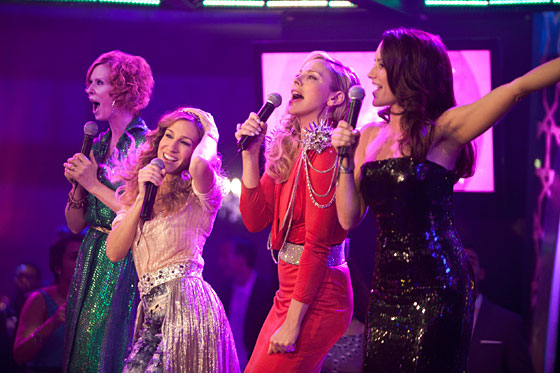 FPQT goes to the Movies: Sex and the City 2

L-A: To be fair to our readers who have yet to see the movie, I’m going to hide any spoilery bits behind a cut.

Quickie verdict: let’s put this franchise to sleep and get a new one.

Now for the no holds barred review (warning, more rant than snark inside):

The only words I have for that movie are these: Sweet Jesus in a breadbasket. That was a trainwreck in stilettos.

Actually, I have more. Lots more.

Here’s the “plot”: There’s a gay gay gay wedding, where everyone talks about how Stanford is gay and is getting gay married to his gay partner at a gay wedding. With Liza Minelli (okay, it was almost worth the $10 to see her do Single Ladies).  Gay!  Smith has a cameo where he introduces Samantha to a Sheikh who wants her to do PR – that’s how they explain the all expenses paid trip to Abu Dhabi (other than the director/writer/producer wanted an excuse to travel to Morocco).  Carrie feels like she’s turning into a nagging wife (she kind of has). Miranda quits her job because she has her first sexist boss ever and her husband suggests she stay at home and help out more (what? don’t they pay someone to help out around the house?). Charlotte’s kids are soooo terrible and she’s jealous of the full time nanny who doesn’t wear a bra. And Samantha has sex and takes hormones. That’s it.  So wheeeee! Vacation! Miranda over researches, Charlotte is either judging someone or trying to phone home, Samantha’s magical hormones are taken away (oh noes! menopause!), and Carrie sees Aiden in the market (and oh hey! leaves her passport at the stall), goes to dinner and kisses Aiden (was this really a shocker?) and has an existential crisis. Samantha offends a conservative dude who gets arrested for making out. The Sheikh decides not to pay for the hotel anymore, so they have to pack and leave in an hour. But oh no! Carrie’s passport! Of course the nice man who sold her the shoes still has it. They wear a burkha like outfit and escape angry, oppressive men and still make their flight in time. At home, everything works out: Carrie and Big are happy, Charlotte takes a break from taking care of her children with her full-time nanny (who is conveniently a lesbian), Miranda gets a new happier job, and Samantha has sex on a beach and doesn’t get arrested. And this paragraph is dragged out over at least two hours. Two hours you will never, ever get back. (Had it been shorter, it might not have been so tedious).

I went into this movie with low expectations. So low, that I said it would be an epic fail even before watching the movie. And it’s not like I only watch high falutin films. I fully admit to paying good money to go see and enjoy Katherine Heigl movies. But since my expectations were so low, I think I had hoped that maybe it wouldn’t be that badt.  That maybe the movie would say, “hey L-A! Don’t judge this book by it’s fluffy cover! I’ve got substance in here!”  And maybe it did say that to me, but if it did, I missed it. I was too busy muttering “what the eff?” and “seriously?’ to actually hear the movie’s pleas. And possibly my feminism got in the way.

Here’s the thing, and I apologize to the ladies who oohed and aahed at the movie: This isn’t the TV show you knew and loved. The characters have the same names, but they aren’t the same. I know. I used to love the show.  I thought it was smart and funny. At least I think it was smart and funny. It’s been awhile. Now it’s just a movie starring four women, written at women instead of for women.  This movie was a parody of the series. The characters have become caricatures of themselves so that every time one of them speaks, it’s like they start the sentence with “I’m a Miranda” or “I’m a Carrie”.

The movie worked really hard to make me feel empowered, but instead it made me feel like an idiot for having ever liked the show. Our four heroes sang “I am Woman” at a karaoke bar and every woman in that bar got up to sing and dance like they knew and loved that song (really? Do you know anyone who knows all the words to that song? And loves it?). That scene, which included an outfit that cost $50,000 (not all the outfits. Just one),  was about as empowering as a tampon ad.  But for all of this empowerment, something was missing. In the moments when Miranda figures out that her lawyer boss is threatened by women who have a voice (she’s only just now experiencing workplace sexism?) or Charlotte breaking down and admitting how hard it is to be a mom with a full-time nanny (“how do women without help do it?”), I didn’t feel empowered. I didn’t want to rise up in solidarity and drink cosmos.  What I felt was rich white ladies privilege. And as a fairly privileged white lady (who is not rich), it didn’t feel all that great. I wanted to throw their effing cosmos in their face.

The faux-empowerment was mostly annoying. The mildly offensive bits? The Middle East is so weird and oppressive! A butler named Abdul must be gay because he almost has the same name as Paula Abdul.  Staring down a woman in traditional Muslim dress because how can she possibly eat a French Fry wearing that? But oh! Aren’t women all the same? Under those oppressive Muslim clothes is Vuitton spring collection! Empowerment!!! It wears ostrich! I’m not saying that Muslim women don’t wear Vuitton, I’m just saying that Vuitton doesn’t mean you’re empowered, it means you’re really effing wealthy. Maybe they could have acknowledged that some women choose to dress that way. Or why they choose to dress how they do under their traditional clothing. I don’t know. Something. But I’m asking too much aren’t I?

You know what I want? I want a movie starring women, written for women, that is actually smart and funny. I’m not an idiot. My friends aren’t idiots. Most women I know aren’t idiots. So why are we okay that the biggest movie event for women, possibly the only movie event that really stars women, is written at us. And if we’re in the theatre for the clothes and the shoes, try harder. Don’t dress SJP in Halston and tell me it’s because it is soooo Carrie. Please bitch, you dressed her in Halston Heritage because SJP is the creative adviser for Halston Heritage. I can deal with a product placement, just don’t pretend it’s something that it’s not.

Ally: L-A feels that I should add a few words to the review. Problem is, I think she’s taken all the words in the English dictionary. Kidding!

I, like L-A, left the theatre feeling fairly disgusted on Wednesday night, and not just because I had missed my old lady bedtime by two hours. I felt mortified that this movie was being described as a call to arms for all independent women. Mortified. Many readers may say we’re overthinking it. Really? Have we met? Overthinking when it comes to pop culture is not really what I do. This is mylife  theme song for eff’s sake:

(Do you have a life theme song? If so you should share! Especially if it is this bad! And I’m sort of kidding that this is my life theme song…sort of).

It’s not as if we can enjoy trivial, we can, I just can’t enjoy it if you dress it up and try to tell me it is a way of celebrating the strength and diversity of women. L-A’s review really says it all (I’m not just being lazy, swears), we have had numerous conversations about it since leaving the movie. I too am angry as I loved the series, totally embraced the series. There was a time during the series when you could actually answer the question, “which woman are you?” without getting total embarrassment cringes. Like, Samantha? Really? If the bitch is really like that then she needs to be up in sex rehab with T. Woods. That shit is not healthy. I don’t care how many condoms the movie had flying out of her purse. “Eeee! A condom! Giggle!”.

To conclude this epic diatribe, I did enjoy the clothes, the hair, and the shoes. Maybe next week we can actually review what we went to see, which was the fashion. Before that I need some time away. I’m too pissed that my favourite show has been made into a movie comparable to a Lindsay Lohan flick circa 2015.