Popular blogs are finding additional lives in books and film. Blogging before publishing in print seems to make perfect sense for the author. As an author you can find out right away if anyone is really interested in anything you have to say. Feedback is immediate (and from what I’ve seen, frank) You have a ready-made audience and promotional vehicle for your book.

But what about the reader? Why do we want to buy books whose content is pretty much available for free? Well, I assume there would be value-added content, or maybe a more intensive level of editing. Is it the format or a sense of ownership? Some people, for extended reading, will always prefer print. The issue of ownership could be both physical and intellectual. Many of us like to own books. Blogs, by their nature, are public vehicles which invite you to share your agreement/objection/opinion (yes?/no?/blather?). Print is static and it’s yours.

Thankfully we have both. And here are successful blogs that you can also find in print.

Julie and Julia: 365 days, 524 recipes, 1 tiny apartment: how one girl risked her marriage, her job and her sanity to master the art of living by Julie Powell – “With the humor of Bridget Jones and the vitality of Augusten Burroughs, Powell recounts how she conquered every recipe in Julia Child’s “Mastering the Art of French Cooking”–and saved her soul. ” – catalogue

Stuff White People Like: the definitive guide to the unique taste of millions by Christian Lander – “”The Preppy Handbook” meets “PostSecret,” in this cultural manifesto for a new generation. Lander and his blog stuffwhitepeoplelike.com have already been profiled by NPR and “The Los Angeles Times,” adding to the success of the Internet phenomenon.” – catalogue

Overheard In New York: conversations from the streets, stores and subways by S. Morgan Friedman – “Updated with sixteen new pages of quips, remarks and exchanges from the creators of overheardinnewyork.com. The streets of New York are full of characters who don’t mince words-or care who hears them. This collection presents some of the most outlandish real life conversations overheard on the sidewalk, in the subway, and at the next table. It’s the Big Apple peeled, a hysterically unvarnished portrait of the city that never sleeps-and often neglects to think before it speaks in public.” – catalogue

Girlfriend and I Have Argued About by Mil Millington – “Things My Girlfriend and I Have Argued Aboutconcerns a guy named Pel who lives with his German girlfriend, Ursula. Pel leads an uneventful life—quietly bluffing his way through his job and discovering new things to argue about with Ursula. But when his boss mysteriously disappears, Pel steps innocently into his shoes and his life spirals out of control in a chaotic whirl of stolen money, missing colleagues, and Chinese mafiosi. Its fractured thriller plot punctuated by blazingly hilarious set-piece arguments between the hapless Pel and the unflappable Ursula,Things My Girlfriend and I Have Argued Aboutis a brilliant comic novel examining the unique warfare in long-term relationships. From the Trade Paperback edition.” 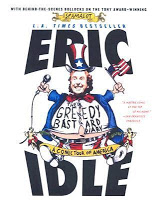 reedy Bastard Diary: a comic tour of America by Eric Idle – “A stunningly witty exploration of the American landscape — not to mention a brilliant comic’s mind — this diary is chock-full of everything you ever wanted to know about Eric Idle, Monty Python, America, and sleeping on a bus. In these pages, the sixth-nicest Python is cheeky, touching, and funny when recounting the riotous tales of his beginnings, his affectionate reminiscences of his fellow Pythons, traveling the world, and taking us backstage at the smash Broadway hit Spamalot. Fascinating, moving, at times even amusing, this book will dramatically improve your sex life, will make you feel intelligent and charming within the first several pages, and after a few chapters, will permanently eliminate all your personal or health problems. So come experience eighty days, 15,750 miles, and forty-nine cities as you never have before! ” – catalogue

Cake Wrecks: when professional cakes go hilariously wrong by Jen Yates – “From the creator of the ultrapopular blog CakeWrecks.com, here are the worst cakes ever, including the ugly, the silly, the downright creepy, the unintentionally sad or suggestive, and the just plain funny.” – catalogue