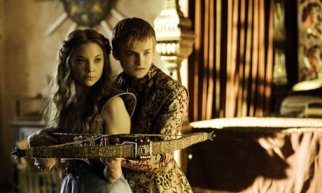 Thanks to a two-hour Mad Men premiere and the fact that Rob can stay up much later than I can on weeknights, I watched Game of Thrones solo on Monday evening.

Sp my apologies if the recap is spottier than usual, I usually count on Rob for filling in some gaps for me.

This episode was kind of tiring, with so many characters on the run and so little happening. I almost nodded off at one point. It’s not that the episode is bad, it’s just that Game of Thrones takes so long to put all the pieces in place – most of the season – before letting things actually happen. With so many characters to keep tabs on (we didn’t even see Daeny this week) it can be a lot to take in. 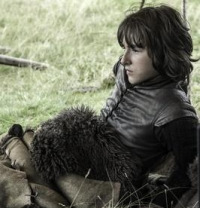 The episode began with Bran having a dream. I’d forgotten literally everything there is to know about Bran: he’s paralyzed and has weird dreams. I was off to a great start. He’s still on the run with his brother, that dude, and Tonks from Harry Potter. This week they added two more to the posse – a dog whisperer named Jojen and his sister, Meera. They’re kids from the North and their father knew Ned Stark. So, allies. 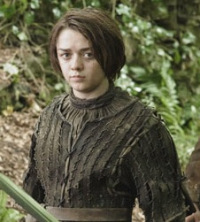 Meanwhile, Arya ended up back in captivity, of sorts, this time with the Brotherhood Without Banners. So now we need to know who they are. They’re led by a guy named Thoros, who definitely isn’t trustworthy but is at the very least against Tywin. Arya seems safe for now, even if she did embarrass herself in the sword fighting department.

Sansa has a crush on Margaery’s brother Loras Tyrell, and met his spunky grandmother. She grilled her about Joffrey, because Margaery is set to marry him. Sansa didn’t want to tell them anything, but she broke and said that Joffrey was behind her father’s death, and had made her look at his decapitated head. They promised to keep her secret, and she told them Joffrey’s a monster. I’m very intrigued by Margaery and her grandmother. No one in GoT ever seems to be completely good, but they seem nice. Will thy betray Sansa? This was my favorite seen from the episode.

I’ve always had trouble caring about Jon Snow, but his character is slowly coming along. Catelyn’s story was compelling and sad, and I like Jon as a fish out of water. But when his chubby little friend had trouble walking, I nearly fell asleep. Up, down, dead, alive – who cares?

I also could have done without Tyrion and Shae’s lover’s spat. I like Shae as a protector of Sansa and as Tyrion’s lover, but watching them bicker over whether Tyrion thinks Sansa is pretty is not what I signed up for. All this stuff with Littlefinger and the rest of them better be going somwhere.

Theon is being tortured. That’s pretty much all I know about that. 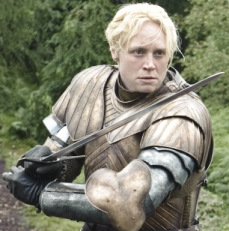 I’ve always liked Jaime and Not Tilda Swinton together. Brie? Is that her name? Like the cheese? Brienne. I was close. Anyway, “It’s a shame the throne was not made of cocks, they’d have never got him off it,” was a thing Jaime said this week. He was referring to Renly, Brienne’s deceased BFF. Watching the two of them on this adventure has been providing some much-needed comedic relief, but things just got complicated.

Jaime finally found the opportunity to break free, grab a sword (Brienne carries two) and fight for his freedom. Seeing them finally sword-fight was exciting, and Brienne pretty handily beat Jaime. It didn’t matter though, since they were both caught by someone named Locke, who I think is basically a bounty hunter. That’s where the episode ended. Not the most exciting installment, but it ended in suspense. What did you guys think?