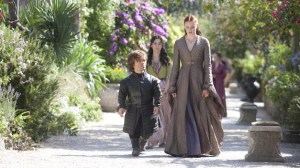 After last week’s memorable episode (some viewers, I hear, are still suffering from PTSD) I wondered what Game of Thrones could possibly have in store for the season finale. If you’ve seen the episode, click through.

Check out my review, and share your thoughts in the comments.

The episode opened with the Red Wedding – more gory violence, and on a more epic scale than what we saw last week. The Hound escaped with Arya on horseback, but not before she saw the killers chanting “Here comes the King of the North” with Robb’s wolf’s head on a spike.

Later, Arya and The Hound passed some men bragging about the slaughtering. Arya jumped off the horse and killed one with a small knife. The Hound took care of the rest with his sword.

Joffrey, of course, reacted with psychopathic glee when he heard of Robb and Catelyn’s death. In fact, he made plans to obtain Robb Stark’s head and serve it on a platter to Sansa at his wedding feast – he boasted about it right in front of Tyrion.

I loved the banter we saw between Tyrion and Sansa, and how he defended her to both Joffrey and Tywin. Tyrion truly is the only likable Lannister. So I guess at some point he’ll die, right? (NO SPOILERS. That was a joke, y’all.)

We finally found out who’s been torturing Theon Greyjoy… kind of. Feel free to jump in with explanation in the comments, please, because I know I could use some clarification. It was Roose Bolton, who betrayed and killed Robb Stark, who talked to Frey about the downfall of Robb Stark in this episode. I know that Bolton is the guy who took Arya as a cupbearer, but I don’t remember much else about him. It’s his bastard son who’s torturing Theon.

Theon’s sister Yara pledged to find her brother, but that was a pretty brief scene.

Ygritte caught up to Jon Snow after he abandoned her last week, and she shot him in the back with an arrow. A bunch of arrows, actually. Man, I didn’t think she’d do it. I thought she’d let him go, at the very least. She could have killed him and didn’t, but still.

Jon made it back to the Night’s Watch fortress, where Sam found him in rough shape.

In Dragonstone, Davos got to know Gendry and tried to convince Stannis and Melisandre not to kill him – even though they were sure that the spell they did with Gendry’s blood led to the death of Robb Stark. I felt like these scenes were kind of skimmed over – what was the point? It had something to do with Jon Snow returning from beyond the wall. I obviously missed something.

So Dany is basically Princess Diana or something. She’s just traveling around, freeing enslaved people and becoming universally beloved. I know it won’t last forever, but for now it’s awesome. That last shot, with all the people lifting Dany up and the dragons, that was pretty epic. I need Dany to come put the Lannister jerks in their place, like, yesterday.

Well, I have to say, this episode probably wasn’t as exciting as last week’s. Overall though, I found this season more captivated and faster paced than previous ones – which is interesting, since this was only half a book. Usually I find the first 4-5 episodes pretty tedious, but I was into this one from the start. What do you guys think?