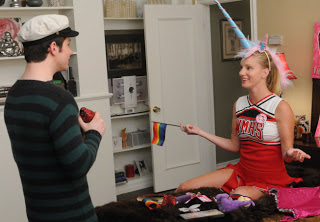 How do we feel about Glee last night, guys? Personally, I’m still not sure. There were some aspects of the episode that I liked, but others that totally fell flat. Musically, it left a little to be desired. I love showtunes, but with only three numbers and all of them from musical theater, it was a tad dry. Anyway, let’s discuss.

I actually really liked Kurt’s storylines this week, since both highlighted his coming to terms with his, shall we say….level of flamboyance? First, Brittany offered to act as his campaign manager for senior class president, telling Kurt that he was a very special unicorn. Yeah yeah, what I want to know is where can I get a unicorn hat? I want one. Now. Unfortunately, Britt and Kurt didn’t see eye to eye on his campaign. Kurt was going with a “toned down” (but still, let’s face it, not particularly straight) simple black and white poster. Brittany’s posters were pink and sparkly and featured Kurt riding a unicorn. I loved them, but I understood why Kurt didn’t.

After a heart to heart with Santana, Brittany decided to run against Kurt for the top job. But there were no hard feelings – she’s just a wise girl who knows she’s special too, and it’s been a while since there was a female class president. God, I hope she wins. I mean, “O” as the capital of Ohio wasn’t exactly a wrong answer. She could do it. 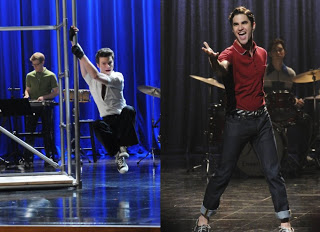 Meanwhile, Kurt also had to face the facts about his own masculinity when he auditioned for the lead role of Tony in West Side Story, McKinley’s school musical being directed this year by Coach Bieste, Emma Pillsbury, and Artie. (Did we ever know before last night that it’s Artie’s dream to direct?) Unfortunately, they just didn’t buy him as a leading man. Poor Kurt. I didn’t help that he showed up in tights (playing Romeo) to try and change their minds. I thought this was such a good storyline for him, and I really felt for him – but not because he was a victim up on a soapbox, which so often happens to that character. This was just a kid with big dreams facing a harsh truth – he can’t really “pass” for straight, so he’ll likely never be cast in romantic leading man roles. That’s a tough pill to swallow for someone who wants to act on Broadway

Blaine, however, was perfect for Tony. His audition was killer. He should get the part. But he’s a junior (did everyone else also think he was a senior?) and decided Kurt deserved the lead, so he only read for secondary parts. Kurt looked on from the back of the auditorium as the directors asked Blaine to read for the part of Tony, and the episode ended there. I hope Kurt realizes that Blaine is a better fit for the role and gives him his blessing. After all, Burt Hummel was to the rescue again with great advice – if there aren’t enough roles out there for someone like Kurt, he should create them.

(Sidenote: I once saw a re-imagining of West Side Story where both Tony and Maria were girls. It was incredibly confusing, since it looked like the reason the Sharks and Jets were fighting because of homophobia. It wasn’t until I saw a classic production several years later that I realized the story was actually about xenophobia and racial stereotyping.)

OK, now this storyline I had lukewarm feelings about. We’ll start with the good – Shelby’s back! I love Idina Menzel, so I was happy to see her character Shelby Corcoran hired to teach at McKinley, all because Sugar’s dad wanted her to start up a rival glee club. Good luck teaching that girl to sing. I liked that the show hadn’t forgotten about her and Beth, and I thought the scenes with Puck were really strong. Shelby was willing to go the open adoption route and have Puck and Quinn be a part of Beth’s life if they could prove they were responsible enough. Puck was willing to do whatever it took, and it was very sweet.

However, the storyline went off the rails for me with Quinn. I won’t even get into her participation in Sue’s anti-arts video and her confrontation with Schue, since it was all so ridiculous. The bulk of her storyline dealt with the return of Shelby, and the daughter she gave up. (BTW, shouldn’t Beth have been older? How old was that baby? She’s supposed to be like, one and a half. Is that how old that baby was?) I understood why Shelby wouldn’t want Quinn, who is obviously going through some kind of personal crisis and has a lot of issues, to be around her baby. But holy cow, is Quinn ever annoying this year.

I thought it was bad when Quinn showed up to glee club dance practice with blonde hair and a white dress on. I thought “Oh come on, there has got to be a happy medium between Junior League Stepford Wife and self-declared Skank.” Couldn’t she have kept a pink streak in her hair, showered and, like, worn jeans? But then it got even more ridiculous, as Quinn whispered to Puck that the whole thing was just an act so that she could fight Shelby for full custody of Beth. Um, girlfriend? Did no one at the hospital explain to you how adoption works? It tends to be pretty permanent. 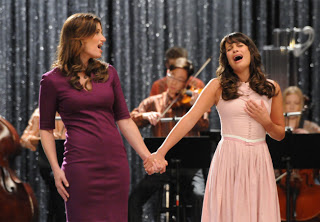 The other thing that didn’t feel quite right to me was Shelby’s interactions with Rachel. Sure, their performance of “Somewhere” pretty much gave me chills. But was were Shelby’s intentions? Was she apologizing? Does she now want a relationship with Rachel? What’s going on there?

What I did like about this episode was that it really just focused on a couple of characters and storylines. Hopefully Glee keeps this up, because season two’s biggest downfall was how scattered and inconsistent it was. What did you think of the episode?

Here are some other quotes and things I liked from the episode: